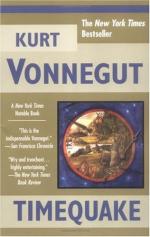 Kurt Vonnegut
This Study Guide consists of approximately 29 pages of chapter summaries, quotes, character analysis, themes, and more - everything you need to sharpen your knowledge of Timequake.

This detailed literature summary also contains Topics for Discussion and a Free Quiz on Timequake by Kurt Vonnegut.

Timequake does not follow the typical novel structure. Rather than telling a story in a straightforward manner, Kurt Vonnegut decides that only the good parts should be included. This leads to a novel that is partly science fiction and partly philosophical musings and observations. The science fiction plot is simple. The universe, for some unknown reason, stops expanding for a period of ten years. All the people in the world find themselves back exactly one decade to the day and must repeat exactly what had already happened during the decade. This means that free will is suspended. Cars, trucks, airliners and any other mechanical transportation mode drive themselves without human intervention. People move through the decade on autopilot, but when the timequake ends, trouble begins.

Certainly there had been tragedies during the repeated decade, but none of them were surprises. Once the timequake ends, suddenly free will comes back to everyone on the planet. Those who are driving or piloting transportation vehicles have forgotten how to drive or pilot, so crashes occur at an alarming rate. New York City becomes one big mess of mayhem. Kilgore Trout, the author's alter-ego character, steps up to the challenge and takes steps to help the injured. He expresses what becomes Kilgore's Creed. He says that you were sick, but now you are well again and there is work to do. The story ends with a clambake after a play in Rhode Island when Trout observes that human awareness is now the fastest thing in the universe, many millions of times faster than the speed of light.

The story is as much about the author as Trout, and since Trout is the alter-ego, the entire story is mostly about the author. This is his last book. He bids a farewell to the publishing industry and mourns the loss of literature appreciation in the modern technical world. His basic philosophy is humanism, which in its most basic expression is the belief that humans can solve their problems without divine intervention. However, the author's philosophy includes the existential conclusion that life is absurd and therefore funny. Although the author considers himself a kind of agnostic, acknowledging that something like God might exist, he holds deep respect for the beliefs of others, especially if he loves these people. The philosophy is far from simple because, as pointed out many times in the book, reality is often a strange and counter-intuitive thing. An important part of the philosophy is not so much doubt about spirituality but serious doubt about people claiming to have knowledge about spirituality, particularly those who make money from the claims. An interesting paradox arises because the author had studied to become a scientist but also thinks that science might have been the biggest mistake that humankind has ever made. His supporting evidence for this is the hydrogen bomb and computer technology that does more to isolate people than bring them together. Since this book was published in 1997, the advancements in computer technology regarding the Internet and better social capabilities since that time are not considered.

More summaries and resources for teaching or studying Timequake.