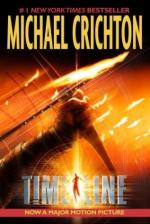 Michael Crichton
This Study Guide consists of approximately 30 pages of chapter summaries, quotes, character analysis, themes, and more - everything you need to sharpen your knowledge of Timeline.

This detailed literature summary also contains Quotes and a Free Quiz on Timeline by Michael Crichton.

Timeline is a novel by Michael Crichton. In this novel, a doctor is found wandering in the desert with unexplained injuries miles from civilization. A company tries to hide the truth. An archeologist discovers that his sponsors know more about his site than he does. A group of researchers find themselves transported to a time six hundred years before their own. Timeline is an interesting look at time travel and the benefits and dangers it could represent to modern man.

While looking for a remote antiques store, the couple comes across an old man wandering alone in the desert. They take the man to the hospital where questions are raised about the man’s condition and how he got to the desert. The man is identified and the company he worked for informed. However, the company seems intent on hiding the truth as they rush to pick up the body and destroy it.

An archeological site in France is in the beginning stages of research. The plan is for scientists to restore the sites to their former glory, but they must first study it and figure out exactly how it looked. When they receive a visit from their sponsor’s representative, they are suspicious that the executive seems to know more about the way the site looked in its glory than the researchers do. For this reason, the head of the project, Dr. Edward Johnston, decides to go back to New Mexico and ask a few questions. A short time later, the researchers who were left behind find a note that was apparently written by Johnston in a previously undiscovered room. Then they get a call to return to New Mexico.

Dr. Johnston’s four best researchers travel to the sponsor’s headquarters. They are given information that stuns them. The company has perfected a way to transport human beings into different dimensions, in essence allowing them to travel in time. Not only this, but Dr. Johnston took this trip and is now missing. The company wants the four researchers to go back in time to find Dr. Johnston.

Three of the researchers, Anton Marek, Chris Hughes, and Kate Erickson travel to the past while computer expert David Stern remains behind. As soon as they arrive, the group is attacked by a group of knights, leaving their escorts dead. Chris then accidentally becomes separated from the group. Marek and Kate decide to go in search of the professor, but they find him just as he is arrested and taken to the castle keep.

The professor is interviewed by Oliver, the warlord, who is preparing for an attack by a warrior monk known as Arnaut. Oliver wants the professor to help in his defense and believes that he can do so. The professor is placed in a dungeon cell while Chris finds himself challenged to a jousting competition with the jealous lover of his new acquaintance, Lady Claire. Chris manages to survive the joust, thanks in part to Marek’s brave attempt to take Chris’s place in the joust.

Chris and Marek are arrested after the joust because they embarrassed Sir Guy. Kate helps them escape, but they are not targets. They find themselves having to avoid the city and Sir Guy’s men, particularly Robert de Kere who seems to be particularly interested in arresting them. At one point, Marek, Chris, and Kate are captured again and taken to a tower room. Kate manages to get out of the room and climb down the side of the building. But, before she can get back to help Marek and Chris out, she is nearly caught by de Kere’s men. Chris and Marek manage to fight their way out of the room.

By this point, the invasion of Arnaut’s army has begun. Oliver moves his people, including the professor. Marek leads Chris and Kate through the woods in an attempt to get to the monastery and find a back way to the higher castle. As they run from de Kere’s men, they become aware that someone else has one of the ear pieces they were given so they can communicate with one another. This suggests that someone else has come from the future to hunt them.

Chris, Marek, and Kate make it to the monastery, but they cannot find what they need. Instead, they make their way to the mill in hopes of finding it there. Marek finds the key to finding the secret passage, but he is separated from Chris and Kate as they are again attacked by de Kere’s men. Arnaut’s men save them, but Arnaut threatens to kill them for spying. Lady Claire argues their case and allows them to go free. However, unbeknown to them, Marek is still alive and also a prisoner of Arnaut’s. Marek is forced to follow behind Chris and Kate with Arnaut’s men to find the secret passage into the high castle.

Marek escapes Arnaut’s men during an ambush and gets into the castle keep. He is arrested and taken to the armory where the professor who is teaching Oliver’s men how to make automatic fire. Marek and the professor are kept together and threatened with imprisonment if things go wrong. At the same time, Kate and Chris find the secret tunnel into the castle. Before they can save the professor and Marek, Arnaut’s army finds the tunnel and invades the castle. There is a fight between Oliver and Arnaut that ends with Oliver in a pool of water from which he cannot escape.

Marek, Chris, Kate, and the professor rush to find a safe place to use the machines that will take them home before the batteries begin to fail. Marek goes into the guard tower to lower the gate. When he realizes time is running out, he makes the choice to remain behind. Marek, Chris, and Kate return home safely where the CEO of the company controlling the machines is sent to his death in the past.

More summaries and resources for teaching or studying Timeline.