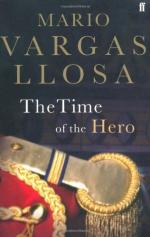 The Time of the Hero Essay

Mario Vargas Llosa
This Study Guide consists of approximately 69 pages of chapter summaries, quotes, character analysis, themes, and more - everything you need to sharpen your knowledge of The Time of the Hero.

In the following essay on Mario Vargas Llosa's novel The Time of the Hero (La cuidad y los perros), Frank Dauster discusses the relationships between history and literature and the varying interpretations of reality they may engender.

The relations between history and literature have concerned man since he first developed what might be called a historical consciousness. Aristotle has said:

It is, moreover, evident . . . that it is not the function of
the poet to relate what has happened, but what may
happenwhat is possible according to the laws of
probability or necessity. The poet and the historian
differ not by writing in verse or in prose. The work of
Herodotus might be put into verse, and it would still
be a species of history with meter no less than without
it. The true difference is that one relates what has
happened, the other what may happen...

More summaries and resources for teaching or studying The Time of the Hero.

The Time of the Hero from Gale. ©2005-2006 Thomson Gale, a part of the Thomson Corporation. All rights reserved.