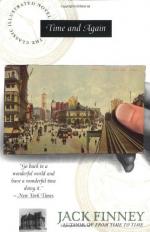 Jack Finney
This Study Guide consists of approximately 57 pages of chapter summaries, quotes, character analysis, themes, and more - everything you need to sharpen your knowledge of Time and Again.

He must decide in which era he wishes to spend the rest of his life.

The context of the novel is the radicalism of the late 1960s. The novel reflects the worry about the dying city, the traditional urban centers threatened by white flight, black rioting, and resulting urban blight. It grows, too, out of crisis of authority prompted by the Vietnam War, the growing realization that citizens should not leave all important decisions to a central government. Finally, the novel discusses the relation between individuality and community, a debate strong in the era when alternate lifestyles, like the commune and the open marriage, competed with traditional social structures for the allegiance of the individual.

More summaries and resources for teaching or studying Time and Again.