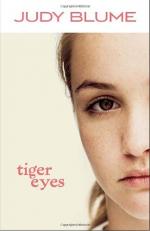 Judy Blume
This Study Guide consists of approximately 89 pages of chapter summaries, quotes, character analysis, themes, and more - everything you need to sharpen your knowledge of Tiger Eyes.

The action in Tiger Eyes occurs in two states, New Jersey and New Mexico. It takes place before, during, and after fifteen-year-old Davey Wexler's first year of high school. The year is approximately 1980 (Davey's father, who graduated from high school in 1964, was thirty-four when he was shot and killed during a robbery of his 7-Eleven store). In the opening scene, the Wexlers are getting ready for the funeral and Davey is desperately trying to find a pair of shoes to wear.

Chapters 1 through 6 take place in Atlantic City, where the Wexlers live in an apartment above Mr. Wexler's store.

After the school year begins, when it becomes apparent that the family is not adjusting well to their loss, they travel to Los Alamos to stay with Davey's aunt and uncle.

Despite being called the Atomic City, Los Alamos, also known as The Hill due to its altitude of...