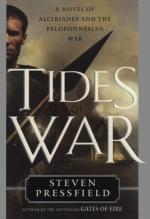 Tides of War: A Novel of Alcibiades and the Peloponnesian War Summary & Study Guide

Steven Pressfield
This Study Guide consists of approximately 41 pages of chapter summaries, quotes, character analysis, themes, and more - everything you need to sharpen your knowledge of Tides of War.

Tides of War: A Novel of Alcibiades and the Peloponnesian War Summary & Study Guide Description

Tides of War: A Novel of Alcibiades and the Peloponnesian War Summary & Study Guide includes comprehensive information and analysis to help you understand the book. This study guide contains the following sections:

This detailed literature summary also contains Topics for Discussion and a Free Quiz on Tides of War: A Novel of Alcibiades and the Peloponnesian War by Steven Pressfield.

Tides of War by Steven Pressfield is a historical novel. It is subtitled "A Novel of Alcibiades and the Peloponnesian War", but also follows the story of Polemides, an Athenian soldier. Indeed, Polemides is arguably the central figure of the novel. The structure of the book follows three broad plots. The overarching story is that of the twenty-seven year long conflict between Athens and Sparta, the two greatest cities of Ancient Greece. Within that is the story of Alcibiades, the Athenian general who was never defeated in battle and was the greatest influence on the events of the war. The third is the story of Polemides, the man who assassinated Alcibiades, but had been his friend and comrade during the war.

The story is told through the reminiscences of Jason who defended Polemides. In preparing Polemides' defense, Jason has Polemides tell him the story of his association with Alcibiades. The bulk of the story is relayed through Jason retelling Polemides' story with occasional interjections of his own to fill in gaps in the tale.

The story of the war is that of the greatest struggle in history at the time. The Athenian empire had grown to be a threat to other city-states that were led by Sparta and needed to contain Athens. What began as a minor struggle became a great conflict that defined a generation and ultimately destroyed both Athens and Sparta, breaking up the empire of the former and irrevocably changing the latter beyond all recognition. Sparta is aided by a succession of Athenian disasters including plague, a devastating defeat that bankrupted Athens, and some disastrous decisions from the Athenian government.

Alcibiades is the central figure of the conflict, moving events at key points in the war. He is a brilliant general and politician who is ultimately brought down by his own flaws which include pride and lechery. Alcibiades begins to build his reputation before he comes of age to actively participate in Athenian politics. As a young soldier he seizes control of a losing battle and saves the troops. He surrounds himself with influential people. Alcibiades is central to Athens' preparations for a massive invasion of the key Mediterranean island of Sicily but he is stripped of his generalship and convicted of treason before he can pursue the campaign, a charge of which he is innocent. Condemned to death, Alcibiades flees to Sparta where he sets in motion the policies that ultimately lead to Athens' defeat. After having an affair with the wife of the Spartan king, he is forced to flee. In the wake of Athens' defeat in Sicily, the populace wants to recall Alcibiades, but he is not ready to return. He does take command of the Athenian fleet, however, leading them to a string of victories.

Alcibiades returns in triumph to Athens and is anointed a de facto dictator, but the bankrupt city is unable to sustain his ambitions and within a year he is forced into exile once more. Soon afterwards, Athens is finally defeated by Sparta. Alcibiades is forced to flee from his enemies, but is ultimately captured and killed by Polemides, his friend, who had been hired for the task.

Polemides awaits trial for a murder. It is not the murder of Alcibiades, but of a simple brawl. His arrest has been arranged by the people who hired him to kill Alcibiades. In preparation for his defense, he tells Jason his story. Polemides was present for most of the major events of the war. He was, at times, part of Alcibiades' inner circle. He fought for both sides in the conflict. He lived through the plague and the Sicilian disaster. Polemides life was shaped by the events of the war. He lost two wives and most of his family to the war. Ultimately, he is forced into killing Alcibiades to save his surviving children and his own life. Jason helps him escape the injustice of his impending execution and he lives out his life soldiering alongside his son.

More summaries and resources for teaching or studying Tides of War: A Novel of Alcibiades and the Peloponnesian War.

Tides of War: A Novel of Alcibiades and the Peloponnesian War from BookRags. (c)2022 BookRags, Inc. All rights reserved.