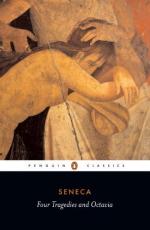 Seneca the Younger
This Study Guide consists of approximately 40 pages of chapter summaries, quotes, character analysis, themes, and more - everything you need to sharpen your knowledge of Thyestes; Phaedra; the Trojan Women; Oedipus with Octavia.

This detailed literature summary also contains Topics for Discussion and a Free Quiz on Thyestes; Phaedra; the Trojan Women; Oedipus with Octavia by Seneca the Younger.

"Four Tragedies and Octavia" is a collection of four plays written by Seneca and one play that is debated whether or not it was written by Seneca. These plays focus on stories from Greek mythology and were written previously by other writers. These plays are very interesting reinterpretations by the renown philosopher Seneca.

In "Thyestes," a feud plagues the House of Pelops, which has been cursed after Tantalus serves his son, Pelops, as food to the gods. Atreus recalls Thyestes from banishment under the false promise to rule the kingdom jointly. Atreus kills Thyestes' sons and serves them to Thyestes at a banquet. Atreus reveals his deception, claiming that he owes Thyestes this vengeance.

In "Phaedra," while Theseus is on an expedition to Hades, his wife, Phaedra lusts after her stepson, Hippolytus. Hippolytus angers Phaedra by rejecting her. When Theseus returns, Phaedra claims that Hippolytus attempted to seduce her which causes Theseus to pray to the gods for Hippolytus' death. Neptune sends a sea bull to frighten Hippolytus' horses that kill Hippolytus. Phaedra admits her deception before committing suicide. Theseus mourns for his son and grants him a proper burial which he refuses to Phaedra.

In "Troades," after Troy has fallen, Calchas tells the Greeks that Astyanax must be killed to appease the gods and Polyxena must be sacrificed to Achilles to ensure the Greeks' safe return to Greece. After Hector visits Andromache in a dream, she tries to hide their son, but Ulysses convinces her to summon Astyanax and takes Astyanax away. Helen summons Polyxena under the false pretense of a marriage to Pyrrhus. Astyanax jumps from the tower of Troy, brave and defiant. Pyrrhus stabs the proud, brave, defiant Polyxena, and Achilles' grave soaks up all of her blood. The Trojan women mourn.

In "Oedipus," Oedipus sends Creon to the Oracle of Delphi to learn how to stop the pestilence that plagues Thebes. He learns that he must avenge King Laius' murder and has Tieresias summons King Laius' ghost to learn who murdered him. Creon relays the ghost's message, claiming that Oedipus murdered King Laius and defiles his father's marriage bed. According to King Laius, Oedipus must be expelled from Thebes to stop the plague, but Oedipus does not believe this and imprisons Creon. A messenger from Corinth arrives to announce King Polybus' death and summon Oedipus to the Corinthian throne. Oedipus is frightened to return to Corinth due to Apollo's prophecy which claims he will kill his father and marry his mother. From the messenger and a shepherd from Thebes, Oedipus learns that his birth parents are King Laius and Jocasta who Oedipus is now married to. Oedipus tears out his eyes, and Jocasta commits suicide after they learn that she is actually his mother.

In "Octavia", Octavia mourns Claudius and Brittanicus. She hates her husband, Nero, and fears what his mistress, Poppaea, will demand he does to Octavia. Nero and Seneca debate Nero's plan to marry Poppaea and kill Octavia, but Nero chooses to ignore Seneca's advice. Nero marries Poppaea, causing his subjects to rebel. The subjects want to restore Octavia to her marriage bed. Nero blames Octavia fore the rebellion and orders her to be taken to a foreign shore and executed. Octavia is eager for death and the escape from Nero.

More summaries and resources for teaching or studying Thyestes; Phaedra; the Trojan Women; Oedipus with Octavia.