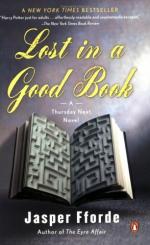 Thursday Next in Lost in a Good Book: A Novel Summary & Study Guide

Jasper Fforde
This Study Guide consists of approximately 29 pages of chapter summaries, quotes, character analysis, themes, and more - everything you need to sharpen your knowledge of Thursday Next in Lost in a Good Book.

Thursday Next in Lost in a Good Book: A Novel Summary & Study Guide Description

Thursday Next in Lost in a Good Book: A Novel Summary & Study Guide includes comprehensive information and analysis to help you understand the book. This study guide contains the following sections:

This detailed literature summary also contains Topics for Discussion and a Free Quiz on Thursday Next in Lost in a Good Book: A Novel by Jasper Fforde.

Lost in a Good Book is one in the series of Thursday Next novels by Jaspar Fforde. Thursday Next is employed by Literary Detectives in Swindon. She appeared on a television talk show and became somewhat of a celebrity with many people interested in her. The Adrian Lush Show wanted to question her about the Jane Eyre "rebookment." Her coworker, Cordelia Flakk had asked her to do the interview, telling her that her request for a transfer would be given serious consideration after the completion of the interview.

Thursday Next becomes a celebrity because of her role in the Jane Eyre affair. In the course of her role in the assignment, she kills the evil Acheron Hades which changed the ending of the novel. Her television interview is deeply censored by Goliath people or the company that she works for. Goliath is a company that employs eight million people and affects the lives of everyone in this fantasy novel.

Recently married to Landen Park-Laine, Thursday learns that she is pregnant. She is also caught up in a series of coincidences that result in three attempts on her life. Her father, an experienced time traveler, rescues her at various times. Landen, a writer, tells her that she does not have to work. He is concerned about her safety. When Landen fails to meet Thursday at a café, she finds that he has been eradicated by Lavoisier and Schitt-Hawse.

In this world of fantasy, characters travel through novels. Her Uncle Mycroft has invented a prose portal that allows interlopers to enter novels but he retired and disappeared with it. Jack Schitt, the half-brother of Schitt-Hawse is stuck in Poe's 'The Raven.' They have eradicated Landen to force Thursday into rescuing Jack Schitt. Thursday however does not know how to enter a novel without the assistance of Uncle Mycroft and the prose portal but she has to find a way in order to rescue her husband.

She enters the strange world of Jurisfiction by using a book and information provided by Mrs. Nakajima, who was an experienced book-jumper. Thursday is assigned as an apprentice to Miss Havisham, a character from Charles Dickens Great Expectations. She has to help Miss Havisham on various assignments while trying to help her father save the world which is to be destroyed on December 12 by a mysterious pink slime which turns out to be strawberry Dream Topping. She learns enough from Miss Havisham to rescue Jack Schitt but Goliath refuses to honor its part of the agreement. She now needs a place to hide until the birth of her baby.

The reader will enjoy the creativity of Jaspar Fford in this fantasy novel. It is quick and easy reading and holds the reader's interest.

More summaries and resources for teaching or studying Thursday Next in Lost in a Good Book: A Novel.

Thursday Next in Lost in a Good Book: A Novel from BookRags. (c)2022 BookRags, Inc. All rights reserved.