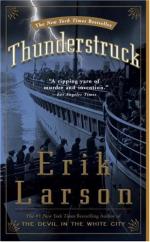 Erik Larson
This Study Guide consists of approximately 31 pages of chapter summaries, quotes, character analysis, themes, and more - everything you need to sharpen your knowledge of Thunderstruck.

Thunderstruck by Eric Larson is a non-fiction book with two main narrative threads. One story is that of the invention and development of wireless communication by Guglielmo Marconi and his associates. The second is the role that wireless played in apprehending the accused killer in a London murder case that was the sensation of its time. Both stories take place mainly during the first decade of the twentieth century in the reign of Britain's Edward VII, during a period known as the Edwardian age.

Marconi's story begins with his privileged childhood in Italy and introduces his passion for electricity. As a young man he moves to London, where he continues his experiments and founds a company that will pioneer wireless communication. Many other scientists are working simultaneously to discover the properties of electromagnetic waves, and Marconi is motivated by ambition as well as by the fear that someone else will be the first to capitalize on his discoveries. Gradually his experiments enable him to extend the distance that wireless messages can be accurately sent. Dogged by huge expense and public skepticism, Marconi works hard but maintains a lavish lifestyle.

Dr. Hawley Harvey Crippen spends his childhood in Michigan and has a checkered career as an employee of patent medicine companies on both sides of the Atlantic. He is dominated by his wife Cora, who later calls herself Belle Elmore. Belle is intent on pursuing a career in music despite her marked lack of talent. The marriage reaches a breaking point during a period when they are living in London. Belle has other interests and friends. Crippen has met Ethel Le Neve, a young girl who is captivated by his gentle manner.

It is a surprise to all when Crippen announces in January 1910 that Belle has left him. Her disappearance raises suspicions, especially after Crippen claims that she has died in America and then reverses himself, admitting that he doesn't know where she is. Chief Inspector Dew conducts an investigation on behalf of Scotland Yard. Crippen is not under suspicion, however, until he and Ethel suddenly leave London.

When decaying tissue remains are uncovered in the basement of Crippen's house, the inquiry intensifies. Due to international press coverage, the case becomes a worldwide sensation, and it is dubbed the North London Cellar Murder.

Henry Kendall, the captain of the SS Montrose, learns of the search for Crippen just before his ship sets sail from Antwerp. He takes note of the Robinsons, ostensibly a father and son, who are traveling together as second-class passengers. Methodically Kendall learns what he can about them during their first days at sea. When he is satisfied that his suspicions have merit, he contacts the nearest wireless station. He does nothing, however, to make the Robinsons think that they are under scrutiny.

Acting on Kendall's tip, Inspector Dew immediately boards a faster ship, intending to reach Canada ahead of the Montrose. The chase becomes public, and newspapers offer daily updates to fascinated readers. Dew succeeds in apprehending Crippen when the Montrose reaches Father Point in the St. Lawrence Seaway, and Crippen and Ethel are conveyed back to England, where Crippen stands trial and is condemned to death. Wireless communication has proved its reliability and utility.

More summaries and resources for teaching or studying Thunderstruck.