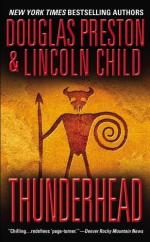 Douglas Preston
This Study Guide consists of approximately 51 pages of chapter summaries, quotes, character analysis, themes, and more - everything you need to sharpen your knowledge of Thunderhead.

This detailed literature summary also contains Topics for Discussion and a Free Quiz on Thunderhead by Douglas Preston.

Thunderhead is a novel by bestselling writers Douglas Preston and Lincoln Child. In this novel, Nora Kelly is an archeologist who finds a letter from her father to her mother, sixteen years after her father disappeared and six months after her mother died. The letter describes her father's journey to a system of canyons where he believes the fabled city of Quivira is hidden. In a bid to prove her father was more than just the pothunter many people, including her own mother, accuses him of being, Nora follows the road he describes. For Nora, however, finding Quivira is only the beginning. This novel will take the reader on a ride that both excites and frightens, bringing history to life in a way that no reader could ever forget.

Nora Kelly goes to her family's old ranch where a neighbor has called to let her know vandals have been at work. Nora walks through the old rooms searching for the vandals, when she is attacked by a person dressed like an animal. Nora fights the person off, denying knowledge of a letter about which the person keeps asking her. A neighbor comes over and chases the attacker off with a shotgun, insisting it was wild dogs. Nora would agree, except for the questions with which they kept plying her. When Nora leaves, one of these creatures appears to be keeping pace with her truck, upsetting Nora so much that she accidentally knocks over the old mailboxes. Nora stops to pick up the boxes and finds a letter in the sand. The letter is to her mother, who has been dead six months, from her father, who has been missing for sixteen years.

The following day, Nora goes to the map archives at the Santa Fe Archeological Institute where she works. Nora wants to check out the directions to the fabled city Quivira that her father wrote about in the letter. Nora studies several maps and feels as though the directions are plausible, but a discussion with her boss at the Institute informs her that the letter is not enough. Nora turns to her brother, to discuss selling the ranch to fund an expedition, and he tells her about a radar the Jet Propulsion Lab at Cal Tech uses. Nora reaches out to a subordinate at the lab to help her. This man, Peter Holroyd, agrees to help as long as Nora allows him on the expedition. Using computers, Peter is able to establish that there was an ancient Anasazi Indian road that ran along the same path Padraic Kelly claimed to have used to find Quivira. With this information, Nora is able to convince the chairman of the board at the Santa Fe Archeological Institute, Dr. Goddard, to fund her expedition.

Nora takes three scientists, including Goddard's daughter, Peter, a cook, and a horse wrangler into the canyons on the Utah side of Lake Powell. From the beginning, Dr. Goddard's daughter, Sloane, tests Nora's authority as the expedition leader, often going off on her own without deferring to Nora. To add to this, the members of the expedition begin to doubt Nora's ability to find Quivira when it takes longer to reach specific landmarks her father spoke of in his letters than Nora initially believed it would. When an ancient path leads to the death of three horses, Nora also loses the support of her only friend on the expedition, Roscoe Swire. However, Nora's confidence soars again when she finds her father's initial cut into the rock of a slot canyon.

Nora and Sloane go through the slot canyon first and begin to explore the valley on the other side where Nora's father claimed Quivira could be found. They see nothing. The following morning they are about to return to the rest of their companions in the other valley when Nora spots the remnants of a ladder built into the side of the canyon. Sloane digs out her rock climbing gear and together they ascend to a bench above the valley. When Nora stands on the bench, she is again disappointed to discover nothing; however, as she turns to leave, she spots an alcove within the bench that is large enough to hide the entire city. The city is invisible from below and above, thanks to the natural alcove. Nora and Sloane quickly explore the city, making note of the complete kiva in the center, the towers at each corner, and the roomblocks still filled with weapons, pottery, and other artifacts. It is the archeological find of the century.

Nora and Sloane inform the others of their discovery and begin their evaluations. Nora contacts the Institute via the radio and tells Dr. Goddard of the discovery. As the days pass, the excitement of the expedition continues to grow except for Aragon. Aragon is disturbed by some of the things he has found, most especially a crawlspace filled with bones, many of which look like they have been boiled. Aragon suggests that the Anasazi Indians were not the only Indians living at this site. At the same time, they open the kiva and find drawings inside that suggest this kiva is a Rain Kiva and that the site once contained the opposite kiva, a Sun Kiva.

One night, as the expedition sleeps, someone kills two of the horses. Nora decides that she and Smithback, the writer, should go after the killers, leaving the others to continue their work. Nora and Smithback ride horses out of the first valley, removing their shoes to prevent them from falling like the others, and follow the tracks of strange horse. Nora is able to track this other horse to the camp site of John Beiyoodzin, an Indian from the nearby Indian village of Nankoweap. Beiyoodzin did not kill the horses but warns of evil in those valleys. When Nora mentions her father, Beiyoodzin becomes distant and bids them goodnight.

Nora and Smithback return to Quivira the following day to discover Peter Holroyd is sick. Within minutes of their return, Peter dies. Aragon, a medical doctor, runs tests on Peter with his limited equipment and suggests to the rest of the group that they should consider returning to civilization. Nora agrees and orders everyone to pack up. As he is packing up, Black finds the entrance to a hidden cave. Inside the cave is the Sun Kiva. Everyone is excited by this find, half of them expecting to find gold inside. Nora orders it left unopened, causing more friction between herself and Sloane. Sloane demands that they open the Sun Kiva rather than leave it to be looted. Nora disagrees and urges everyone to continue packing their things to leave the following morning.

In the morning, Nora sends Sloane and Black to check the weather report. The weather report is clear, but Sloane and Black can clearly see a thunderhead over the Kaiparowits Plateau. Rain over the plateau almost guarantees a flash flood for the valley where Nora plans to spend the day packing the horses. Sloane chooses not to tell Nora about the thunderhead and Black follows her lead. Nora, Aragon, and Smithback enter the slot canyon carrying packages to the horses to be packed. On the way, Aragon tests Holroyd's body for a fungus he suspects of having killed him. When it proves to be positive, Aragon tells Nora that this fungus is probably all over Quivira and is most likely what caused the Indians to abandon the city so quickly they left their most precious belongings behind. Aragon tells Nora they have all been exposed and must get back to civilization to be treated. Before they can, however, a flashflood fills the slot canyon, trapping them inside.

Aragon, Nora, and Smithback attempt to climb the sides of the slot canyon, but Aragon is swept away. Nora and Smithback make it to a tiny ledge where Smithback protects Nora from flying debris with his own back. As they fight for their lives, Sloane decides they are dead and orders the remaining members of the expedition to open the Sun Kiva. Black and the cook do most of the digging, taking in most of the fungus laden dust. When the Sun Kiva is opened, Sloane discovers hundreds of pots, bowls, and jewelry decorated with the rare micaceous process. Sloane knows that no complete pieces of pottery of this style have ever been recovered, making this the most important find of Quivira.

Nora and Smithback make their way back to the camp after dark and find it abandoned. Unknown to them, the skinwalkers have arrived and killed Roscoe. Nora puts Smithback in the medical tent and goes to search for the others. Nora runs into Sloane and they argue, with Nora accusing Sloane of murder. Sloane pulls a gun and Nora runs for her life. Sloane finds Smithback in the medical tent and sets up a trap for Nora. However, instead of killing Nora, Sloane has injured one of the skinwalkers. Sloane returns to Quivira, where both Black and the cook have been killed by the skinwalkers and finds herself running for her life.

Nora joins Sloane and discovers the skinwalker chasing her. Together they climb into one of the towers where they manage to knock the skinwalker down with a lucky shot from Sloane's pistol, the final shot. As Nora and Sloane argue about the Sun Kiva, the skinwalker returns and attacks Sloane. Nora watches as they fall off the side of the tower to their deaths below. Nora climbs down from the tower and remembers there were two skinwalkers. Nora begins to run when a shadow appears behind her so hides in the roomblocks, arming herself with an ancient spear. Nora stumbles on the cook's body and finds he had a gun. Nora uses the gun, killing the skinwalker with multiple shots.

Nora returns to the camp and finds Beiyoodzin waiting for her and together, Nora and Beiyoodzin join Smithback on the Priest's Trail and begin to make their way out of Quivira valley. They run into the skinwalker Nora had thought died with Sloane. Beiyoodzin tricks the skinwalker into trusting him and then pushes him off the canyon wall. Beiyoodzin then promises to tell Nora about her father someday. Nora and Smithback are rescued from the canyons and spend a month recovering from the fungal infection. Nora, Smithback, and Skip return to the area and are taken to the place where their father died. They are able to piece together his final days from his journal, learning that Padraic Kelly found Quivira and took one artifact before repairing the damage he had done to the city. Padraic became infected with the fungus and headed north in search of help. With no help in sight, Padraic stopped in a small alcove overlooking a valley and died.

Beiyoodzin's cousin found Padraic's body, but the village of Nankoweap decided to leave him as he was. One of three brothers from Nankoweap mailed Padraic's letter, feeling as though his family deserved to know where he had died. The other two brothers killed the first and completed their transformation into skinwalkers, Indian witches. The skinwalkers valued Quivira as a piece of their heritage and wanted to protect it. The skinwalkers killed in order to stop the looting of Quivira.

More summaries and resources for teaching or studying Thunderhead.