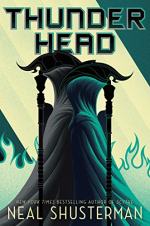 Thunderhead (Arc of a Scythe) Summary & Study Guide includes comprehensive information and analysis to help you understand the book. This study guide contains the following sections:

This detailed literature summary also contains Quotes and a Free Quiz on Thunderhead (Arc of a Scythe) by Neal Shusterman.

The following version of this book was used to create this study guide: Shusterman, Neal. Thunderhead. Simon Schuster Books for Young Readers, 2018.

In Part One, Rowan Damisch assumed the persona of Scythe Lucifer. He offered to give Scythe Brahms a second chance and begin gleaning more humanely. Meanwhile, Citra Terranova established an unconventional gleaning method as the newly ordained Scythe Anastasia. She would give her chosen subjects a month to get their affairs in order and allow them to choose the way they wished to die. Citra disguised herself by taking off her scythe’s robes and met with Rowan in secret in Mortality Memorial Park. When Rowan returned to his apartment, he met his old friend Tyger, who told him that Rowan’s father had been gleaned and that Tyger was moving to the Charter Region of Texas for a new job. When Tyger arrived in Texas, he learned that his employer was Scythe Rand, who wanted him to be her scythe’s apprentice.

In Part Two, Greyson Tolliver had grown up essentially being raised by the Thunderhead. He wished to attend Nimbus Academy and become a Nimbus agent. However, once he went to the academy, Nimbus Agent Traxler persuaded him to interfere with scythedom affairs by saving Scythes Anastasia and Curie from an attack on their lives, in which the Thunderhead could not interfere itself. Nimbus Academy expelled Greyson and the Thunderhead marked Greyson as an unsavory, cutting off any contact between them. Agent Traxler encouraged Greyson to embrace the unsavory lifestyle and help the Thunderhead by gathering intel on the ways of the deviant society. Meanwhile, Scythe Rand trained Tyger to his physical limits.

In Part Three, Scythe Faraday enlisted the help of Munira Atrushi, a student, former scythe’s apprentice, and night worker at the restored Great Library of Alexandria. Faraday planned to research the history of the first scythes and learn about the fabled Land of Nod. Scythe Constantine headed the investigation on Scythe Anastasia and Curie’s attackers. He encouraged them to stop gleaning in the meantime. Citra planned to follow up with three of her gleaning subjects to try to trap the attacker. Meanwhile, Greyson adopted the unsavory lifestyle and changed his identity to Slayd. He went to AWFul (Anachronistic Wish Fulfillment) clubs, where he met Purity, an anarchic unsavory with whom he falls in love. Agent Traxler changes Greyson’s records in the Thunderhead to match his new, fabricated identity. Citra’s first two attempts to draw out her attacker with scheduled gleanings were unsuccessful. Her third try was a public gleaning during a performance of Julius Caesar, in which she would glean the lead actor on stage. Meanwhile, Rowan learned that Scythe Brahms had gleaned his father, so he went to the scythe’s home to seek vengeance. He was careless in his rage and Brahms’ guards captured him.

In Part Four, Rowan woke in Texas, where Tyger told him about his training with Scythe Rand. Rowan thought he had killed Rand during Scythe, so he worried about her true intents with Tyger. Greyson agreed to help Purity with a job that would aim to kill several scythes, even though he did not want to do so and warned the scythedom anonymously of the attack. Purity had rigged the sprinkler system in the theater with acid, so that once her cohorts lit a fire in the theater, everyone in the theater, including Scythes Anastasia and Curie, would die permanently. During the performance, Greyson sabotaged Purity’s attack. Scythe Constantine gleaned Purity. Citra helped Greyson flee. She instructed him to go to a Tonist compound, where the monks would offer him sanctuary from the scythedom. In Texas, Rowan sparred with Tyger to aid in his training, but Rowan always won. Then, one day, Rand brought a man into Rowan’s room, who had Tyger’s body and the head of Scythe Goddard, whom Rowan had also killed during Scythe. Rand had gleaned Tyger and attached Goddard’s head to his body, so that Goddard could lead the new-order movement in the scythedom once more.

In Part Five, Citra and Scythe Curie attended Winter Conclave in Fulcrum City. High Blade Xenocrates announced that he was stepping down as High Blade of MidMerica to become a Grandslayer on the World Scythe Council. The old-guard scythes nominated Scythe Curie as their candidate for High Blade. The new-order scythes nominated the newly returned Scythe Goddard. After the candidates gave their speeches and the scythes voted, Citra voiced an inquest about Goddard’s legitimacy, since only his head, 7% of his body, had been trained and ordained as a scythe. This inquest postponed the results of the election until the World Council considered it. Goddard left the conclave in a rage. He gleaned several people. Then, he returned to Texas and killed Rowan many times, making Rand bring Rowan to an off-grid revival center. Then, Goddard and Rand departed for Endura, with Rowan in tow as their captive.

In Part Six, Citra and Scythe Curie arrived on Endura for the inquest. Meanwhile, Scythe Faraday and Munira went to the Library of Congress and discovered a blind spot in the Thunderhead’s programming, thereby revealing it to the Thunderhead, which had a camera in the room. Scythe Rand attempted to seduce Goddard the night before the inquest, but Goddard rejected her. Rand freed Rowan from his captivity in Scythe Brahm’s vacation home and told him to leave the island. Goddard was outraged when he noticed Rowan’s absence the following morning and killed Brahms. In the World Council chamber, Citra and Goddard both spoke their cases. The Grandslayers decided that Goddard must complete an apprenticeship before becoming a true scythe again. This disqualified Goddard from his candidacy, so Scythe Curie became High Blade of MidMerica. Meanwhile, Endura experienced many technology failures, resulting in the buoyancy control of the island to crash. The island began to sink, but the alarm to warn the Grandslayers in the council chamber had been disconnected. The chamber filled with water and sharks. Goddard flew overhead in a helicopter and pretended like he would save the Grandslayers, but abandoned them to be eaten by the sharks. Scythe Curie locked Citra and Rowan in a vault, so that their bodies would be preserved and they could live again. Then, she led the other scythes to glean themselves with honor. The Thunderhead began screaming around the world, which the Tonists viewed as the Great Resonance they had always worshipped. Every human was marked unsavory and lost their connection to the Thunderhead at this moment, other than Greyson Tolliver, whom the Thunderhead had chosen to trust.

Thunderhead (Arc of a Scythe) from BookRags. (c)2022 BookRags, Inc. All rights reserved.