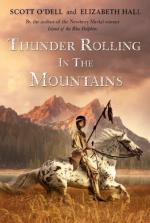 Scott O'Dell
This Study Guide consists of approximately 50 pages of chapter summaries, quotes, character analysis, themes, and more - everything you need to sharpen your knowledge of Thunder Rolling in the Mountains.

Thunder Rolling in the Mountains Summary & Study Guide includes comprehensive information and analysis to help you understand the book. This study guide contains the following sections:

This detailed literature summary also contains Quotes and a Free Quiz on Thunder Rolling in the Mountains by Scott O'Dell.

The following version of this book was used to create the guide: O’Dell, Scott and Elizabeth Hall. Thunder Rolling in the Mountains. Houghton Mifflin Harcourt, 1992.

O’Dell and Hall’s novel consists of twenty-three chapters, all narrated by Sound of Running Feet, daughter of a chieftain of the Ne-mee-poo, and one afterword, removed from the plot of the narrative and providing facts about the real lives of the characters in the book. The book is presented as a novel, but is in reality the account of the struggles of the Ne-mee-poo people to evade persecution by white soldiers in the United States during the late nineteenth century. Elements of the novel are stylistic choices made on the part of the authors, but the unfolding of events is factual.

Chapters One through Four take place mainly in the Ne-mee-poo village where Sound of Running Feet lives with her parents. The main events in this section is the arrival of General Howard, a white soldier, to their village to discuss the removal of the Ne-mee-poo to a different piece of land. Joseph, chieftain of the Ne-mee-poo, previously refused to move his people from their homeland in Wallowa, but sensing that violence may occur, he finally gives in and states that his people will be in Lapwai, a different land, within a month’s time. Too-hul-hul-sote, a Ne-mee-poo priest, protests and wants to fight, as does Sound of Running Feet herself. The section ends with the announcement that the Ne-mee-poo will be leaving their homeland to avoid a war. Sound of Running Feet’s betrothed, Swan Necklace, fears war but must become a warrior.

Chapters Five through Eight describe the perilous journey of the Ne-mee-poo to a land near Lapwai, but, just as they are about to reach it, a foolish act committed by one of their own warriors ignites a war between the white soldiers, called Blue Coats, and the Ne-mee-poo. Two separate battles occur while the Ne-mee-poo reroute their journey and head to the land of the Crow people, where they hope to receive help and protection from the Crows. The section ends with a peace pact between some white settlers in Montana and the Ne-mee-poo.

Chapters Nine through Twelve see the peace pact broken as the Ne-mee-poo are attacked by white soldiers and the white settlers alike. After the fighting has ended, Sound of Running Feet’s mother is killed, as are many Ne-mee-poo, who face their greatest losses to date. The group escapes hastily after that, stealing the Blue Coats’ mules before continuing their journey in an effort to slow their enemies’ pace.

Chapters Thirteen through Sixteen describe the Ne-mee-poo’s shock and sense of betrayal when their arrival in the land of Crows is heralded by bad news: the Crows will not help them. The Ne-mee-poo decide to head north to Canada, the Old Lady’s Country, where they know they will be safe, encountering white women settlers along the way whom they take as prisoners but release in good faith. The Crows are now fighting on the Blue Coats’ side, and the Ne-mee-poo engage in battle with them once again.

In chapters Seventeen through Twenty, the Ne-mee-poo are hopefully that they can reach Canada without losing many more of their own people. But, the Blue Coats are now working with the Cheyenne people as well, and have caught up to the group. After intense fighting, the majority of the Ne-mee-poo’s bravest warriors are killed. Chief Joseph eventually surrenders to the white soldiers, while a fellow chieftain takes all those Ne-mee-poo who refuse to surrender northward, accepting the risk this entails. Sound of Running Feet knows her conscience will not let her surrender: she sets off with Swan Necklace to catch up to the other Ne-mee-poo going north.

Chapters Twenty-one through Twenty-three describe the final events of the novel. The young couple is caught by Assiniboin people, welcomed into the village, and subsequently betrayed as Swan Necklace is stabbed so that Sound of Running Feet might become an Assiniboin man’s wife. She patiently bides her time, numb to everything, until on the day of her wedding she can become lost in the chaotic festivities and sneak away from the village. She runs as fast as she can, escapes the pursuit of her husband, and eventually continues her journey north. The Afterword describes her consequent life in Canada and return to Lapwai many years later, and somberly states that Joseph suffered after his surrender and never saw his homeland again.

More summaries and resources for teaching or studying Thunder Rolling in the Mountains.

Thunder Rolling in the Mountains from BookRags. (c)2022 BookRags, Inc. All rights reserved.