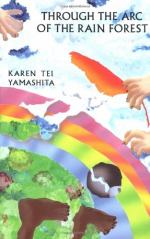 Through the Arc of the Rainforest Summary & Study Guide

Karen Tei Yamashita
This Study Guide consists of approximately 38 pages of chapter summaries, quotes, character analysis, themes, and more - everything you need to sharpen your knowledge of Through the Arc of the Rainforest.

Through the Arc of the Rainforest Summary & Study Guide Description

Through the Arc of the Rainforest Summary & Study Guide includes comprehensive information and analysis to help you understand the book. This study guide contains the following sections:

This detailed literature summary also contains Quotes and a Free Quiz on Through the Arc of the Rainforest by Karen Tei Yamashita.

The following version of this book was used to create this study guide: Yamashita, Karen Tei. Through the Arc of the Rain Forest. Coffee House Press, 1990.

This novel is told in six parts, each with five to six chapters. The end of the first chapter reveals that the narrator is a small piece of asteroid debris that has attached itself to the protagonist’s forehead. The novel opens on the protagonist, Kazumasa, growing up in Japan. He has an ordinary, happy childhood despite the satellite. Kazumasa decides to move to Brazil, where his cousin Hiroshi lives. Batista and Tania Aparecida live in Kazumasa’s new neighborhood in São Paulo. They decide to start a carrier pigeon business together. Meanwhile, a man named Mané Pena living in the Amazon basic claims to discover “the feather.” When Mané Pena is living, scientists also discover a sheet of rock called the Matacão. An American corporate executive named J.B. applies for a job at GGG.

In Part II, Tania Aparecida and Batista continue to tinker with their pigeon messaging system. A young fisherman named Chico Paco agrees to make a pilgrimage to the Matacão on behalf of his once-crippled, now-healed friend, Gilberto. He arrives at the Matacão accompanied by a few followers and a television news reporter. Kazumasa’s housekeeper, Lourdes, encourages him to experience the community and to enter sweepstakes and lotteries; he wins everything and becomes wealthy. Back in New York, J.B. takes even greater control of the company called GGG. After seeing a television report on the Matacão, he decides to invest in the region.

In Part III, J.B. arrives in Brazil. He brings his entire corporate building and staff with him. J.B. tries to curry favor with Kazumasa, who has become an accidental majority stockholder in GGG Enterprises. Chico Paco travels back to São Paulo, where he meets Lourdes. Tania Aparecida discovers that she prefers business negotiations and haggling over prices to cleaning, cooking, and other housework. The narrator explains the Matacão in greater details, including that it is made of industrial waste that has since turned into plastic.

In Part IV, it is revealed that Kazumasa’s ball is actually made of the same material as the Matacão, and thus feels an inexplicable attraction to it. J.B. plans to use the ball to find other deposits of Matacão plastic. Mané Pena has become an authority on feather use, and counsels Chico Paco. Michelle Mabelle, an ornithologist, arrives in Brazil. She starts working for GGG, and soon dates J.B. Chico Paco starts a Foundation for Votive Pilgrimages and gets his own radio show. Tania Aparecida makes plans for international pigeon homing routes. Batista is jealous when she does not answer his phone call.

In Part V, GGG has used Matacão plastic to make magnetized credit cards. GGG makes practically everything out of Matacão plastic. Mané Pena, the world’s most renowned “featherologist,” weighs in on the controversy surrounding the endangerment and possible extinction of Brazilian bird species. Michelle Mabelle cautions consumers to buy only GGG brand feathers. Chico Paco and GGG start a joint venture: Chicolándia, an amusement park made entirely of Matacão plastic. Tania Aparecida comes up with the idea of pigeon advertising and partners with Pomba Soap Company.

In Part VI, a typhus-like disease sweeps through Brazil. The typhus is related to a kind of lice being spread via bird feathers. Chico Paco organizes a Carnival event to raise people’s spirits. Kazumasa escapes from the GGG agents guarding him, and rejoins Lourdes. Chico Paco is killed by a bullet intended for Kazumasa. Bacteria begin to eat the Matacão and everything made from it. Michelle Mabelle leaves J.B., who then throws himself out the window of GGG’s high-rise building. Mané Pena dies from typhus. Batista returns home to Tania Aparecida, and Lourdes finally confesses her feelings for Kazumasa. Kazumasa’s ball, also made of the Matacão material, is eaten by the bacteria.

More summaries and resources for teaching or studying Through the Arc of the Rainforest.

Through the Arc of the Rainforest from BookRags. (c)2022 BookRags, Inc. All rights reserved.