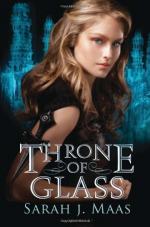 Sarah J. Maas
This Study Guide consists of approximately 31 pages of chapter summaries, quotes, character analysis, themes, and more - everything you need to sharpen your knowledge of Throne of Glass.

Weapons are a very common sight throughout the novel. Celaena spends a lot of time when first freed from the mines making crude weapons.

One of the most difficult tests for Celaena involves poisons, and she is poisoned during the final duel.

Fairy-folk are said to have disappeared, but the king's soldiers are still afraid of them just the same.

Wyrdmarks are magical symbols that have various powers. Cain uses them to summon demons, and Nehemia uses them for defensive reasons.

The three most important characters, Celaena, Dorian, and Chaol are all very fond of books, and the king's library is said to have over one million of them.

Endovier is a slave-labor city where prisoners are forced to mine salt for the king of Adarlan.

Once home to the Fae, Celaena and the others travel through the ancient woods...

More summaries and resources for teaching or studying Throne of Glass.