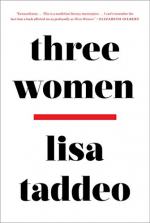 Lisa Taddeo
This Study Guide consists of approximately 40 pages of chapter summaries, quotes, character analysis, themes, and more - everything you need to sharpen your knowledge of Three Women.

The non-fiction work begins with Maggie Wilken, a young high school student who begins an illicit relationship with her teacher, Aaron Knodel. Her sections flit between a present day trial of Aaron Knodel for sexual misconduct among passages which detail their relationship and how her obsession grows to a fever pitch and eventually her accusation a few years after she graduates from high school. Maggie struggles with her relationship with her parents and she often seeks out attention from others. When she loses her virginity to a much older man on a family trip to Hawaii, she tells Aaron, beginning the inappropriate nature of their relationship. Hundreds of texts, covert meetings and numerous hours of late-night phone calls ensue, and for the first time in her short life Maggie feels seen and loved. Maggie does everything she can to keep the relationship going by not reminding him she is underage and not mentioning his wife and kids. Soon he texts her that he thinks he's falling in love with her. On his 30th birthday, Maggie texts him but his wife sees the message, and the affair is over. When Knodel is named “North Dakota’s Teacher of the Year” in 2014, Maggie breaks her five years of silence and despair and tells her parents about the relationship. She goes to the police. Six months later her father slits his wrists and dies. In court Knodel claims not to remember Maggie much during the year of their affair, but does recall that she was “needy” and had “issues.” He is acquitted on three of five charges of corrupting a minor. A mistrial is declared on the other two charges.

Sloane's story takes place in Newport where she lives her with her husband. They own a restaurant together and often engage in sexual behavior with other men or women who work with them. Throughout the entirety of her sections, Sloane is confused about whose desire she is serving. She struggles between wanting to make Richard, her husband, happy while also wanting to pursue her own desires and feel normal. When Sloane begins a relationship with Wes, one of their servers, his wife finds out and her harsh dismissal of Sloane calls into question her entire premise of self-worth which is especially based on her appearance.

Lina's story takes place in Indiana where she lives with her husband and children. She flits back and forth between high school and the present day, centering around her high school sweetheart, Aidan. Aidan was the first and only boy to make Lina feel truly seen and noteworthy. When she later marries another man who does not give her enough attention, she begins to wonder about whether she should stay faithful. She begins a damaging affair with Aidan and separates from her husband, doing whatever necessary to spend time with him despite her knowledge that he does not love her. Eventually, Lina and Aidan end their affair and Lina falls into depression and loneliness.

More summaries and resources for teaching or studying Three Women.