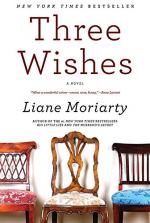 Liane Moriarty
This Study Guide consists of approximately 42 pages of chapter summaries, quotes, character analysis, themes, and more - everything you need to sharpen your knowledge of Three Wishes.

Three Wishes takes place in present-day Australia. The novel opened with accounts, told from several different witnesses, of a brawl which took place in a restaurant between triplets who were there to celebrate their birthday.

The triplets were Cat, Lyn, and Gemma Kettle and the novel gives the backstory that led up to the night they fought with each other in the restaurant. Cat’s husband Dan told her that he’d had a one night stand with a woman who he met in a bar. Lyn was very angry with Dan for his behavior despite the fact that Lyn met her husband, Michael, while he was still married to another woman. Gemma was woken up by a phone call from a man called Charlie: a locksmith whom Gemma had stood up the previous night. Charlie came over to Gemma’s house and they went out on a date. The triplets sat outside the house of Angela, the woman Dan had an affair with, and Cat asked Angela for directions.

Cat and Dan began marriage counselling during which Dan revealed that he had had sex with Cat’s sister Lyn before he and Cat had become a couple. Lyn protested that she thought Cat already knew. Lyn offered to host Christmas Day at her house and Gemma said that she would bring her new boyfriend Charlie to meet the whole family.

Cat found out she was pregnant. Dan said that he wanted the baby. On Christmas Day, Charlie’s sister’s car broke down so he brought her with him to Lyn’s house. His sister was Angela, the woman Dan had an affair with. Cat told Gemma that she would have to break up with Charlie. Over Christmas dinner, the triplets’ divorced parents Frank and Maxine announced that they were dating again.

Cat had a miscarriage. She checked Dan’s phone bill and saw that he had been calling Angela, despite assuring Cat that it had been a one night stand. Cat told him to move out. Gemma broke up with Charlie. Lyn began having panic attacks and confided in her ex-boyfriend Joe, but not with her husband Michael. Gemma found out she was pregnant. She decided not to tell Charlie because she didn’t want to keep the baby. She suggested that Cat should adopt the baby and Cat agreed.

The triplets went out for a birthday meal together during which Gemma told Cat that she had changed her mind and wanted to keep the baby. Cat threw a fork at Gemma and it stuck into her stomach, making her bleed. Cat fainted and broke her jaw. Gemma started having contractions and Lyn called an ambulance. Gemma went to hospital in the ambulance and Cat and Lyn got a ride with a man who had witnessed the fight in the restaurant.

Gemma phoned Charlie from the ambulance and he arrived in time for the birth. They decided to raise the baby together. Dan told Cat that he was moving to Paris with Angela: something he and Cat had always dreamed of doing. Cat’s mom told her to move on with her life.

Lyn’s ex-boyfriend Joe visited and told Lyn that he was looking for an author who could write for teenagers and Lyn suggested Cat would be good at it because of a newsletter Cat wrote for Lyn’s teenage step-daughter Kara. Cat agreed to write a book proposal.

Frank and Maxine got remarried. Lyn hired the man who gave them a ride from the restaurant to the hospital as a photographer for the wedding. Cat asked the photographer out on a date and he said yes.

More summaries and resources for teaching or studying Three Wishes.