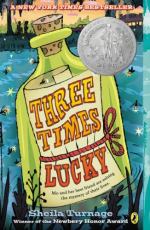 Sheila Turnage
This Study Guide consists of approximately 57 pages of chapter summaries, quotes, character analysis, themes, and more - everything you need to sharpen your knowledge of Three Times Lucky.

"Three Times Lucky" tells the story of a murder mystery in a small North Carolina town, Tupelo Landing, population 148. Mo, short for Moses, LoBeau is the main character and also the narrator. She is an 11-year-old rising sixth grader who was sent downstream on a makeshift raft as an infant. A man nicknamed the Colonel and a woman named Miss Lana have been raising her ever since.

On a day like every other day, many of the townspeople are eating lunch at the cafe owned by the Colonel and Miss Lana. Mo helps out most days, since their house is attached to the cafe and she likes being around her caretakers. She and Dale were supposed to go fishing, but Miss Lana left town and the Colonel is too tired to cook so Mo and Dale take over. During the lunch hour, a stranger named Detective Joe Starr from Winston-Salem arrives at the cafe, in town to investigate a murder from his jurisdiction. The townspeople, including Mo, distrust him immediately.

Dale temporarily steals Mr. Jesse's boat for his and Mo's fishing escapade, but returns it after he and Mo convince Mr. Jesse to offer a $10 finder's fee. Mo and Dale are asked by Dale's older brother, Lavender, to time Lavender's laps at the local raceway. They are honored, and take their responsibility seriously. On their way home, they learn that Mr. Jesse has been found dead aboard his rowboat behind his house. The murder weapon is not immediately found, neither is the killer. The people of Tupelo Landing don't like uncertainty, so they begin to stick together more than usual.

Since Mo and the Colonel don't trust Detective Starr, Mo decides to take matters into her own hands and try and solve the mystery of Mr. Jesse's murder. She and Dale form Desperado Detectives, a detective agency that Mo treats as completely legitimate. She and Dale follow leads, use their resources - including townspeople and insider information - and show up at Starr's interviews and at the crime scene. Meanwhile, there is a short, round-headed man following Mo and Dale around town. Dale thinks the man is his bodyguard, but the man hides every time Mo and Dale make eye contact with him.

Miss Lana comes back from Charleston, but then the Colonel leaves. Mo doesn't like when one of them is gone, but she's used to it. This time, though, she wants the Colonel home, safe and sound. She and Dale continue following leads and trying to solve the murder. They meet Deputy Marla who says she works with Starr on communications and some field work. Mo trusts her, but Dale thinks she's conning them.

Meanwhile, Mo and Dale raise more than $1,000 for Lavender to fix up his car so he can race in the upcoming Sycamore 200. Lavender is so thankful, he gives Mo a kiss on her cheek, which elates Mo since she has a major crush on him. Mo races home to tell Miss Lana, but when she gets to her house she discovers a ransacked living room and no Miss Lana; Miss Lana has been kidnapped.

With both of her caretakers missing, Mo stays with Dale at his house. Dale's mom, Miss Rose, takes care of her and Dale encourages her not to give up. Even though giving up is not in Mo's nature, she's highly discouraged since both of her caretakers are missing. Mo and Dale continue to follow their leads. They tell Deputy Marla an old rumor about the Colonel, hoping it gives her some information that'll lead to either him or Miss Lana.

During the investigation, Hurricane Amy begins in the ocean and makes its way toward Tupelo Landing. Mo and Dale ride out the storm at Dale's house, and Miss Rose goes to great lengths to make Mo feel at home; she lights candles, spreads junk food out on the table, and plays five-card poker with Mo and Dale, since Mo is used to Miss Lana throwing a hurricane party at home when there is one.

Dale's phones are tapped when the Colonel calls to warn Mo not trust Starr or anyone else. She can only hear snippets of his warning, since the phone lines are fuzzy, but she hears enough to know to get a packet labeled "Slate" from the Colonel's closet. Marla doesn't pick up in time, so Mo is able to lie about who the call was from. When she and Dale go to retrieve the packet, Marla and Slate aren't far behind. They discover that Marla is in with Slate, not Starr, and knock her out then flatten her tires so she can't leave when she wakes up.

Mo and Dale go to the Blalock place to find Miss Lana, but all they find is blood on the floor and on the walls. They are afraid Miss Lana has been killed, so they hurry back to Dale's house to tell Miss Rose. As the storm rages outside, Dale's alcoholic father, Mr. Macon, arrives, threatening to move back in. He insults Dale and slaps Miss Rose, which is when Mo attacks by kicking him hard in the knee. He falls to the ground and Dale picks up his mama's shotgun and points it at his father, threatening to shoot. Mr. Macon tells Dale he doesn't have it in him, but that's when the Colonel shows up and says if Dale doesn't, he does. Mo ties up Mr. Macon with an extension cord, and the group remains at Dale's house to continue riding out the storm.

The Colonel pressures Mr. Macon into telling him where Slate is, since Slate hired Mr. Macon to deliver pizzas to Miss Blalock's place. Mr. Macon tells them to check Mr. Jesse's place, since they talked about going back there. The Colonel heads over to Mr. Jesse's house with Mo and Dale, since Mo refuses to be left behind and Dale feels a sense of loyalty to Mo. There, they find Slate. Mo and Dale attack him against the Colonel's orders to stay put, but they succeed in knocking him off his feet. Slate is caught, Miss Lana is found, and the Colonel finds out he used to be a lawyer, a profession he claims to hate.

The cafe reopens two weeks later. Miss Lana tells the townspeople how she and the Colonel knew each other for many years before they separately arrived in Tupelo Landing: the Colonel was Slate's lawyer back when Slate was charged with bank robbery. Slate murdered the Colonel's secretary because the Colonel wouldn't help him get the cash he stole, for which the Colonel blamed himself. He drove to Tupelo Landing to warn Mr. Jesse that Slate would probably come for him next, since Mr. Jesse's cousin was the guard shot in the heist, but the Colonel crashed into the bridge, erasing his memory of anything before the crash. When Miss Lana arrived a week later, the Colonel had taken on Mo and had no recollection of Miss Lana or their engagement. Miss Lana stayed because she loves the Colonel, and she wanted to help him raise Mo.

Learning the story of Miss Lana and the Colonel helps Mo finally accept them and the people of Tupelo Landing as her people. She welcomes the Colonel home after his two-week trip to Winston-Salem with Detective Starr, and her world is righted once and for all.