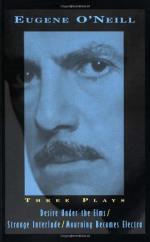 Eugene O'Neill
This Study Guide consists of approximately 58 pages of chapter summaries, quotes, character analysis, themes, and more - everything you need to sharpen your knowledge of Three Plays.

This detailed literature summary also contains Topics for Discussion and a Free Quiz on Three Plays by Eugene O'Neill.

This collection of plays by one of America's best known and most acclaimed dramatists explores variations on the central theme of family. Epic in both length and emotional scope, all three plays (written in the early years of the 20th Century) broke new ground in their explorations of sexuality, relationships, and theatrical storytelling. In doing so, they also explore secondary themes relating to the corruptible power of both love and revenge, and the complicated relationship between past and present.

The first of the three plays is Desire under the Elms, set in rural New England in the mid-1800s and written with a style of dialogue that carefully and deliberately evokes the lack of education of its characters. The narrative traces the struggle of Eben, youngest child of hard-edged farmer Ephraim Cabot, to retain what he believes to be his rights to the farm brought by his now dead mother into her marriage. His struggle is complicated by the presence of his two older half-brothers from Ephraim's first marriage, who claim rights to the farm as their father's legal heirs, and by the presence of Ephraim's third wife, the possessive and sensual Abbie. Eben's own surging desire for Abbie complicates matters further. The situation becomes fraught with tension when, after Eben's older brothers leave to chase gold fortunes in California, Eben and Abbie become sexually involved. The consequences of their union bring what they see as true love and what the audience would likely see as foolish tragedy to them both. The play's title is a reference to the elm trees surrounding the Cabot family farm and the desires that heave and explode in the house built beneath their shelter - for power, for sex, and for security.

The second play in the collection is titled Strange Interlude. It relates two decades of events and confrontations in the lives of Nina, a charismatic but emotionally unstable woman, and the three men who, in their various ways and for their various reasons, are in love with her. Over the course of the lengthy, emotionally dense narrative, Nina marries a man she does not love, aborts her husband's child, becomes pregnant by another man, passes that child off as her husband's, and possessively attempts to ruin the eventual engagement of her son - all in the name of self-redemption for what she sees as a past mistake. The most noteworthy element of this play is the way in which the characters speak their innermost thoughts aloud, revealing what is known to theatre professionals as "subtext" to the audience. In other words, what in most plays remains unsaid is, in Strange Interlude, verbalized in the same way as the regular dialogue. The title of this play is a quote from Nina's dialogue, in which she refers to an individual's life as a "strange interlude" in the mind and experience of God.

The collection's third play is Mourning Becomes Electra, a retelling and adaptation of one of the seminal pieces of world theatre - the Classical Greek play The Oresteia. The play's title is an ironic reference to a character in that play, the emotional young daughter (Electra) of the murdered father she adores. A multi-generational saga of horrific betrayal and revenge set at the end of the American Civil War, the action of the play is anchored by the story of Lavinia, a young woman not unlike Nina from Strange Interlude in her emotional volatility, her assertive ruthlessness, and her desire to control. Lavinia is a witness to the murder of her beloved father by her hated mother, is an active participant in the death of her mother's lover, rejoices at the revenge-motivated death of her mother, and struggles to sustain the sanity of her worshiped brother (who believes he was responsible for his mother's death). Through it all, she desperately yearns for the freedom to love the decent man who has repeatedly proposed marriage to her. By the end of the play, however, she comes to realize that she is the true (not to mention the only remaining) heir to her family's tortured spiritual isolation, locked into place by the family history of betrayal and hatred, and resolves to spend the rest of her life alone.