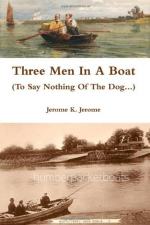 Three Men in a Boat: To Say Nothing of the Dog Summary & Study Guide

Jerome K. Jerome
This Study Guide consists of approximately 32 pages of chapter summaries, quotes, character analysis, themes, and more - everything you need to sharpen your knowledge of Three Men in a Boat.

Three Men in a Boat: To Say Nothing of the Dog Summary & Study Guide Description

Three Men in a Boat: To Say Nothing of the Dog Summary & Study Guide includes comprehensive information and analysis to help you understand the book. This study guide contains the following sections:

This detailed literature summary also contains Topics for Discussion and a Free Quiz on Three Men in a Boat: To Say Nothing of the Dog by Jerome K. Jerome.

"Three Men in a Boat: To Say Nothing of the Dog" is Jerome K. Jerome's amusing account of a two-week boat trip up the Thames River from London to Oxford and back. The trip is taken by his friends George and Harris and himself, along with his rat terrier, Montmorency.

After a few false starts in the preparations, the three men leave on their journey in a rented rowboat. As they pass each town and village along the way, J. provides brief, humorous histories of the area and the various monarchs and other notable figures associated with it. His imagination is slanted toward the chivalrous days of knights and damsels, and he often imagines these kinds of scenes as they pass along the river, while sometimes letting his idyllic daydreams distract him from important things, such as watching where he is steering the boat.

The three men are good friends, and enjoy each others' company despite their occasional flare-ups. Jerome's descriptions acknowledge that they all take themselves too seriously at times and his humor is self-effacing when their pride or cockiness leads them into ridiculous situations. The young men are financially comfortable, but are not to proud to sleep two or three to a bed in a hastily-rented spare room in a pinch. They imagine themselves to be handy and proficient outdoorsmen, but are confounded by tasks such as setting up a tent or cooking over a camp stove. Jerome depicts these situations with a gentle humor.

Much like the river journey it depicts, the book meanders from place to place, from topic to topic, and Jerome salts the book with hilarious anecdotes about his friends that he is reminded of by various events on the trip. Montmorency is treated as one of the characters, and his predilection for catching rats and starting fights is depicted with the same tone of admiration J. offers his human friends.

The men make their way to Oxford, sometimes camping in their canvas-covered boat, sometimes staying at inns, and enjoy two days at Oxford before heading back downstream to London. As they leave Oxford, it begins to rain, and despite their original insistence to stick out the whole journey, they guiltily leave their boat behind and take the train for the final leg. The book ends with the three men (and the dog) enjoying a fine meal in a London nightclub, toasting themselves and their friendship.

More summaries and resources for teaching or studying Three Men in a Boat: To Say Nothing of the Dog.

Three Men in a Boat: To Say Nothing of the Dog from BookRags. (c)2022 BookRags, Inc. All rights reserved.