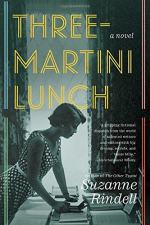 Suzanne Rindell
This Study Guide consists of approximately 56 pages of chapter summaries, quotes, character analysis, themes, and more - everything you need to sharpen your knowledge of Three-Martini Lunch.

The following version of this book was used to create the guide: Rindell, Suzanne. Three-Martini Lunch. G. P. Putnam's Sons, 2016.

Three-Martini Lunch takes place in Greenwich Village in the 1950s: the hotbed of beatnik culture—a moment when young writers, artists, and intellectuals rebelled against established societal norms, all the while fueled by a steady stream of alcohol, cannabis, and jazz music. It is this setting that the three characters—who all come from different backgrounds—repeatedly run into one another.

Cliff Nelson is a privileged, white college dropout with literary aspirations. He has been cut off from his wealthy parents and lives in a seedy apartment in Greenwich Village, where he spends his time drinking and writing with the local hipster crowd. Eden is a young Jewish woman from Indiana who has arrived in New York to pursue a career as a book editor. She gets hired at a publishing house Torchon & Lyle as a secretary to a strict man named Mr. Turner. Finally, Miles is a young black Columbia graduate from Harlem. His mother gives him a key that she says will open his father’s locker in California where he kept his wartime journals. He works as a messenger to save up money for the journey and we learn that Miles has a girlfriend named Janet that he plans to marry. Miles also helps a man named Mister Gus with deliveries and household chores, who he discovers is a lonely, frail old man. He suspects Mister Gus is homosexual and feels uncomfortable around him.

The three characters move towards their goals alongside one another: Eden and Cliff pursue literary careers while Miles prepares for his trip to California. Cliff contributes a story to a new literary journal and tries and fails to gain the approval of his father. Meanwhile, Eden is promoted to Reader by Mr. Turner, who she also finds is strict and impossible to please. She also accepts the challenge of taking on more manuscripts from her mentor, Miss Everett. This requires her to spend long nights at the office, where she is repeatedly harassed by an obnoxious, drunken editor named Mr. Frederick. When Mr. Frederick tries to sexually assault her, Mr. Turner gets the wrong idea and fires Eden. Eden discovers that Miss Everett had manipulated her into this compromising position, and that it was due to her Jewish name that Mr. Turner had been so hard on her. After struggling to find a new job, Eden decides to shed her Jewish identity and takes the false name Eden Collins. She also gets a dramatically shorter haircut, which is an outward symbol of her inner transformation. The novel vividly captures a society of uncompromising sexism and anti-Semitism.

Cliff becomes acquainted with a young man named Rusty who works for a famous literary agent. Cliff recognizes that Rusty is a manipulative, lecherous character but for the sake of his writing career, he courts him by taking him out on the town and paying for his tab. Meanwhile, with her new name and look, Eden gets hired as Cliff’s father’s secretary. Eden works hard to impress her new boss, and one day the long hours catch up to her and she gets sick with the flu. Cliff, who was on his way to visit his father, arrives just on time to catch her as she faints. This launches their romantic relationship and soon after, they elope and secretly marry. Cliff starts writing a novel and Eden types up his pages, discovering that he is not a talented writer. Miles is dragged into their messy literary ambitions when they host a party, and Rusty—who they continue to keep around because of his literary connections—assaults Miles.

Miles leaves for California, and the author portrays him as a hero embarking on a classic quest to find a hidden treasure—and more than that, to find himself. He meets a man named Joey in San Francisco, who helps him find his father’s army journals. By reading these journals Miles reconciles his relationship with his father and discovers that his father was a hero. Through the process of reading his father’s journals and rewriting them into a memoir, Miles goes through a period of self-healing and discovery. At the same time, he develops a romantic relationship with Joey, and from the safety and privacy of the houseboat they temporarily live in together, their love blossoms.

Meanwhile, Cliff and Eden face marital disharmony as they fight about Cliff’s manuscript and recover from the guilt of what happened at their party between Rusty and Miles. The author continues to weave together the lives of these three characters, even while they are on opposite coasts. In a way, Cliff and Eden had pushed Miles to the point where he needed to escape New York to California in order to heal. And the event with Rusty and Miles in turn causes distance to emerge between Eden and Cliff. Their personal relationships and literary ambitions are intrinsically linked.

Joey gets a job in D.C. so that he and Miles can continue seeing each other back on the east coast. But after receiving a letter from Janet, his girlfriend who was waiting for him back home, Miles has a fit of anxiety as the reality of what was happening to him sets in. While Joey was out for the day, Miles packs his backs and leaves for New York. Upon his return home, he falls into a depression that is only relieved when he rekindles his relationship with Joey by visiting him in Washington to apologize. Meanwhile, during an encounter with Cliff at a café, Miles loses the composition book he was writing his father’s memoir in. Cliff finds it and takes it home and begins to rewrite Miles’ story and passes it off as his own. Eden, without knowing Cliff’s secret, helps him get a publishing deal at his father’s publishing house, and Miles is furious when he learns what happens. He confronts Cliff and accuses him of stealing his manuscript, but Cliff is able to silence him by threatening to report his homosexual relationship to the State.

The narrative speed picks up pace and the novel’s point of view switches between characters more frequently. This climactic collision between all three characters has been building up throughout the novel, and the narrative speed reflects this. Each instance where these characters interact further links their fates. Eden discovers the truth about Cliff’s plagiarized novel and sends an anonymous tip to Mr. Nelson. Cliff’s book deal is cancelled and he is devastated by the loss of his father’s approval. He is further humbled when he overhears his friends discuss his poor writing ability and refer to him as a Hemingway imitator. Eden is forced to resign because of the scandal, and finally embraces her name. She asks Mr. Nelson to write her letter of recommendation to Ms. Mavis Singer, a female editor she had met at a literary party, under the name of Eden Katz. Meanwhile, Joey is interrogated by the F.B.I. after they received an anonymous call that suggested he may have communist ties and that he may be gay. He descends into a paranoid frenzy and Miles, who had been pushing him away out of fear, is too late to save him. Joey commits suicide, and Miles, heartbroken, regrets not being there for him.

The author sets the epilogue 20 years in the future, in 1980. Each character is given a short section to reflect on the way their lives turned out after that fateful collision over Miles’ manuscript. We learn that Cliff and Eden had their marriage annulled, and Cliff—who had gone on to publish his plagiarized novel at another company, thanks to the Machiavellian help of Rusty—remarried a woman named Carolyn. Cliff is in the hospital dying of liver disease, and in a final act of honesty, he mails Miles’ lost composition book to Eden. Meanwhile, Eden has become an editor-in-chief and associate publisher. She never remarried and instead found the success she had dreamed of. Finally, Miles had married Janet, had a son named Marcus, and now teaches poetry at Berkley University. All the while, the memory of his relationship with Joey has haunted him. In a surprising plot twist, the author reveals that it was Miles who had anonymously reported Joey for possible communist ties and homophobia—not Cliff or Rusty. He had only wanted to scare Joey into being more careful and to put some distance between them, and has lived with the profound regret and guilt ever since. Eden arrives in California and meets Miles to return his composition book. She offers to publish a memoir should he write one, and encourages him to tell the truth of their stories and of their generation. The story ends with Miles thinking to himself that in order to find redemption, we must be honest with ourselves.

More summaries and resources for teaching or studying Three-Martini Lunch.