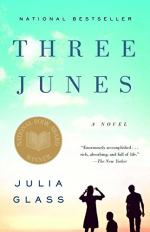 Note: This study guide specifically refers to the First Anchor Books paperback edition, May 2003, of Three Junes by Julia Glass.

Three Junes is a novel of family and love by Julia Glass. The story follows the lives of members of the McLeod family of Scotland and the lives of the people they touch. When the novel begins in June 1989, widowed family patriarch and World War II veteran Paul McLeod travels to Greece with a tour group for a change of scenery and to help cope with the death of his wife. Paul meets a recent American college graduate named Fern, who befriends and flirts with the much older Paul. Paul feels happier than he has in years, only to discover Fern has actually fallen for his friend and tour companion, the thirty-something Jack. Jack, who has a girlfriend in London, coldly uses and dismisses Fern when the tour group moves on.

The novel jumps forward to June, 1995. Paul has died. His three children all come together for the funeral, including chef Dennis, his wife Veronique, and their three girls, Laurie, Thea, and Christine; childless veterinarian David and Lillian; and the gay bookstore owner Fenno who has been living in New York. Fenno has been having a difficult time with life, not because he is gay, but because his love life has been in a shambles. He was emotionally in love with a man named Mal, recently dead of AIDS, and is sexually involved with an irresponsible and noncommittal man named Tony. As Fenno sits around with his family, he begins to realize how loved and accepted he is among them, and how much he has missed them since he has avoided going home whenever he could, for whatever reason he could, as a result of his unhappiness with life.

The funeral comes and goes, and Veronique tells Fenno that the family would love to have him around more, because he is so loved and so missed. She urges him to move back to Scotland, but Fenno will not leave New York. Fenno then receives a bombshell letter from Lillian, writing on behalf of herself and David. Unable to conceive because of David, Lillian and David wish to conceive artificially –and want Fenno to be the donor. Fenno is stunned by the news. He considers what it will be like to be a father and an uncle at the same time, and Fenno ultimately determines that he will donate sperm.

The novel jumps ahead in time to June, 1999. Fern is on vacation in Greece with Tony, her friend. Fern, following the death of her husband in New York, has been dating and has become pregnant by a New Yorker named Stavros. Fern worries how he will take the news, and dreads telling him because her love life has never worked out for the best. She will keep the baby no matter what, but hopes it does not lead to a loss of love with Stavros. Fenno and Dennis, on vacation in Greece at the same time, are invited over for dinner. By now, Dennis and Veronique have had two children, and Fenno marvels at being a father. Tony explains to Fern that being a mother will bring an entirely new kind of love into her life, which comforts Fern. She wants to be the best mother that she can. She receives a number of loving and reassuring voicemails from Stavros, which help convince her that when she returns to New York, he will be there waiting for her, and he will not leave her when she reveals she is pregnant.