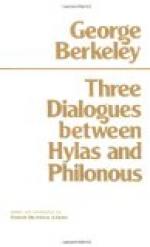 George Berkeley
This Study Guide consists of approximately 56 pages of chapter summaries, quotes, character analysis, themes, and more - everything you need to sharpen your knowledge of Three Dialogues between Hylas and Philonous.

This detailed literature summary also contains Topics for Discussion on Three Dialogues between Hylas and Philonous by George Berkeley.

The following version of this book was used to create this study guide: Berkeley, George. Three Dialogues between Hylas and Philonous. Hackett Publishing Company, 1979. Edited by Robert Merrihew Adams.

In the early morning, Philonous finds Hylas lost in thought in the college garden. Both men are deeply disturbed by the prevailing tendencies in philosophy, which they feel has lost its way to skepticism and intellectual detachment. When Hylas discovers that Philonous does not believe in the existence of a material world outside of us, he accuses him of being one of the skeptics. In response, Philonous issues him a challenge: that Hylas, together with Philonous, examine both theories and adopt whichever one leads to the least skepticism. This leads to three dialogues between the two, each covering a day of discussion.

In the first discussion between the two thinkers, George Berkeley examines the major philosophical systems of his time – many of which have survived to the present time – and dismisses them all as leading to an untenable skepticism which denies that we can ever observe the world. Philonous and Hylas start by questioning the nature of perception, since both think, contrary to the mainstream, that we immediately experience the real world. Analyzing our everyday experiences of things, Philonous demonstrates how our sensations depend on our perspectives; they are parts of our minds, not parts of the world. As such, he shows that Hylas’s view, that our sensations show us things that exist outside of us, is deeply naïve.

In turn, Hylas presents a large number of theories about the nature of matter, which show that even if we do not perceive it directly, it nonetheless underlays our experiences and is the bedrock of the perceivable world. One by one, Philonous deconstructs these theories, showing either that they are incoherent or that they rely on some mysterious abstraction which we have no way of justifying. Since all we ever experience is our experiences, we cannot even conceive what lies beyond. Reduced to a state of confusion and frustration, Hylas admits that any materialist theories are flawed, but unable to give up his accustomed beliefs, asks for a night to think about it.

On the second day, Philonous outline his alternative theory, called immaterialism. We can escape from skepticism, he says, by rejecting the idea that there is something fundamental beyond our perceptions and thoughts. This does not mean that things are unreal or illusionary; Philonous thinks that in his theory, trees, houses, and cars are even more real and present than on a materialist theory. The difference is simply that the world, at its core, is mental and not material. This mental world, Philonous further outlines, is sustained by the mind of God. In arguing these ideas, Philonous establishes several conclusions about religion and the nature of God. Hylas resists these ideas by offering several other conceptions of matter, such as the possibility that matter is an occasion for God to bring into being certain events, but Philonous shows that all these theories end up being not just incoherent, but meaningless. Finally convinced, Hylas admits that matter is either impossible or means nothing.

When Philonous and Hylas meet on the third day, Hylas has adopted total skepticism. If something as obvious as matter turns out to be false, then all theories must ultimately be flawed and we can never know anything for sure. He attempts to show this by bringing a large number of objections to Philonous’s immaterialism. Among these objections are illusions, which challenge Philonous’s theory that we perceive things as they really are, the difficulty of reconciling immaterialism with the Creation Story, and the worry that our own minds and God are just as unknowable as matter. Philonous demonstrates the falsity of each of these objections and thereby fleshes out his own theory, showing how it coheres with both common sense and philosophical analysis of perception, science, and theology. He also claims that his theory will liberate science, mathematics, morality, and many other fields from the needless speculation of philosophy and instead render all intellectual inquiry richer and more engaged with the real world and God. In the end, Hylas finally adopts Philonous’s immaterialism, and Philonous advises him on how to defend this theory against those who will inevitably attack it.

More summaries and resources for teaching or studying Three Dialogues between Hylas and Philonous.