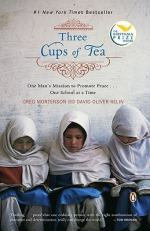 Three Cups of Tea: One Man's Mission to Fight Terrorism and Build Nations-- One School at a Time Summary & Study Guide

Three Cups of Tea: One Man's Mission to Fight Terrorism and Build Nations-- One School at a Time Summary & Study Guide Description

Three Cups of Tea: One Man's Mission to Fight Terrorism and Build Nations-- One School at a Time Summary & Study Guide includes comprehensive information and analysis to help you understand the book. This study guide contains the following sections:

This detailed literature summary also contains Topics for Discussion and a Free Quiz on Three Cups of Tea: One Man's Mission to Fight Terrorism and Build Nations-- One School at a Time by Greg Mortenson.

Greg Mortenson is participating in a climbing expedition in Pakistan, up the rugged face of a mountain called K2, when a fellow climber becomes ill. Greg and a friend help the man down to rescue choppers and find that they are simply too exhausted to make another attempt at the summit. They pack up and walk out, headed toward civilization. Greg, overly tired and not paying attention, wanders away from the trail and his porter, a man named Mouzafar. Greg finds himself in the remote village of Korphe and stays there for several days. He learns about the people and their customs and is welcomed by a leader, Haji Ali, who comes to think of Greg as a son. When Greg asks to see the school, he discovers that the children have to meet outside in all kinds of weather and that they share a teacher. He is so moved by their devotion to study—carefully copying multiplication tables in the dirt without a teacher to oversee their work—that he makes a promise to build a school for the village.

Back in the United States, Greg starts trying to raise money but can find little support. He is finally approached by Dr. Jean Hoerni who writes Greg a check for twelve thousand dollars with the instructions "don't screw up." Greg returns to Pakistan, buys the materials and then faces the problem of getting the materials to the remote village. Back in the United States, he approaches Hoerni with the problem and receives another check for ten thousand dollars to build a bridge. Greg returns to the project which winds up taking several years. He travels back and forth to the United States in between his work on the bridge and then the school, until Hoerni calls on a friend to write Greg a check for living expenses so that there is no need for him to work at his profession as a nurse.

Hoerni dies and leaves a million dollar bequest to form the Central Asia Institute. Greg draws a salary from that and marries a woman named Tara Bishop. The couple have two children though Greg continues to spends months every year in Pakistan, building many more schools, adding onto government schools, paying teachers and providing educational materials. He travels back and forth to the country, lending his help when there is a need for fresh water for the country's refugees fleeing military presence and helping to establish fresh water systems, hydo generators and adult vocation buildings in an effort to improve the overall quality of life for the people.

After the September 11, 2001, attack on the United States, Greg finds himself urging help in educating the young people of the country, saying education provides options for the youth and that this is the only way to eliminate a rush to join the insurgents. Greg is touted as a forward-thinking hero by some but is criticized by others for providing aid to America's enemy. He eventually realizes that it is time to move on and prepares to break ground on similar projects in other countries.