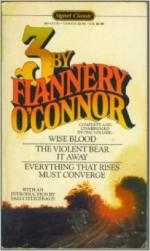 Three by Flannery O'Connor: Wise Blood ; the Violent Bear It Away ; Everything That Rises Must Converge Characters

Three by Flannery O'Connor: Wise Blood ; the Violent Bear It Away ; Everything That Rises Must Converge Summary & Study Guide Description

Three by Flannery O'Connor: Wise Blood ; the Violent Bear It Away ; Everything That Rises Must Converge Summary & Study Guide includes comprehensive information and analysis to help you understand the book. This study guide contains the following sections:

Julianappears in Everything That Rises Must Converge

Julian is a recent college graduate who has returned home to live with his mother until he gets a job. The mother dotes on Julian, something that Julian both takes for granted and resents.

The mother needs to lose twenty pounds and goes to the Y once a week. Because the buses have been newly integrated, the mother will not travel alone. Julian is annoyed that he has to take his mother but is reminded of all the things the mother does for him.

From the very beginning of the story, Julian is rude to his mother. Everything the mother does is wrong, from the way she speaks to the way she acts and dresses. Julian has no patience. On the bus on the way to the Y, the mother and son discuss integration. Julian wants to embrace the modern world and is disgusted by his mother's resistance to change. A well dressed Negro gets on the bus and is reading a newspaper. Julian insists on trying to talk to the man, although the man isn't interested and becomes annoyed. Julian is better than all of these people and feels the need to prove it.

Julian continues to be annoyed with the mother no matter what the woman does. A Negro child likes Julian's mother, and it seems as if the child's mother and Julian's mother switch places. At the Y, the mother offers the child a penny, against Julian's advice. The child's mother proves Julian right when she punches the mother in the face. Julian berates his mother until he notices that something is wrong. As Julian begins to realize that his mother is having a stroke, he begins to treat her with respect.

Hazel Motes is a character who appears more than once in O'Connor's work. In the beginning of "Wise Blood," Motes is riding a train to his hometown of Eastrod. Motes has just been released from the army after four years and is eager to return home, even though his mother is dead. The one thing that has kept Motes going during his stint in the army is possession of the Bible given to him by his grandfather. In fact, listening to his grandfather preach and reading the Bible is the only way Motes had become even moderately literate. As a result, the only thing Motes wants is to become a preacher like his grandfather. However, Motes has a peculiar way of looking at religion and has little reverence for Jesus, something that is highly unusual for a wannabe preacher. The one thing Motes practices devoutly is the avoidance of sin.

Once Motes reaches the town of Eastrod, he discovers that much has changed in the time he was gone. Motes wanders aimlessly through the town and finally settles in at a boarding house with a single, older woman. For the first time, Motes sleeps with a woman, although he still declares himself to be free from sin.

Motes's life changes when he meets Asa Hawks and his daughter Sabbath. Hawks is a blind preacher who works on the streets. After speaking with Hawks, Motes is even more determined to go forth with his evangelism and begins to tell people about his "Church Without Christ", where Jesus plays no part, there is no building, and everyone is welcome.

Asa Hawks is a preacher and self-proclaimed prophet who travels around with his daughter trying to convert sinners. Hawks blinded himself to prove he had been redeemed.

Enoch Emery is a boy who works in a small town zoo. Emery attempts to befriend Hazel Motes.

Sabbath Hawks is Asa's daughter and assistant. Motes has a vested interest in Sabbath and ends up supporting her.

Mason Tarwaterappears in The Violent Bear it Away

Mason Tarwater is a man who considers himself to be a prophet. He lives on a farm with his great nephew, Francis.

Francis Marion Tarwaterappears in The Violent Bear it Away

Francis Marion Tarwater is the great nephew of Mason Tarwater.

Rayber the Schoolteacher appears in The Violent Bear it Away

Rayber, also known as "The Schoolteacher" is the nephew to Mason Tarwater. Rayber appears as a heathen who does not believe Francis' story about the death of his great uncle.

Julian's Motherappears in Everything That Rises Must Converge

Julian's mother is the target of Julian's rage in Everything That Rises Must Converge. Julian resents his mother from coming from a privileged home and also from having to take her to the YMCA.

Mrs. Watts is the landlady in Wise Blood. Watts is somewhat of a suspicious character who takes the opportunity to have sex with Motes.