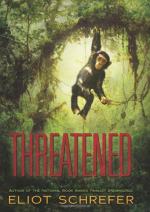 Eliot Schrefer
This Study Guide consists of approximately 39 pages of chapter summaries, quotes, character analysis, themes, and more - everything you need to sharpen your knowledge of Threatened.

This detailed literature summary also contains Quotes and a Free Quiz on Threatened by Eliot Schrefer.

Threatened is a young adult/adventure novel about an orphan named Luc who has lost everyone close to him but gains a new and unexpected family as he sets off on a journey into the jungles of Gabon.

Forced to lie and steal to pay off his debts to his guardian, Monsieur Tatagani, Luc is taken by surprise when he is noticed by Professor Abdul Mohammad (or "Prof"). Prof takes Luc under his wing and hires him on as a research assistant to help him in his studies of the chimpanzees deep in the Gabonese jungles. Luc was always warned by his mother about the chimps or "mock men" who would steal boys away at night and vows to run away the first chance he gets. However, once in the jungle, Luc begins to bond with the mysterious Prof and his pet monkey Omar. They soon encounter a family of chimpanzees named Beggar, Drummer, and Mango, who have been run off from their group of chimps and are being hunted down by both humans and apes. Despite being frightened of Drummer, Luc finds himself drawn to the chimps and invested in their survival.

When the chimps' mother, Beggar, is killed and Drummer is badly injured, Luc attempts to help the baby, Mango, stay alive. Then Prof falls ill and is killed, presumably by Drummer. Luc wants to kill Drummer in revenge but knows he must keep him alive for Mango's sake. Luc debates going back to civilization but ultimately decides to stay behind and help Drummer and Mango rejoin the other chimps. He helps Drummer learn how to use noise to become the dominant chimp in his tribe. To his surprise, Luc bonds with Drummer in the process, and the two learn to live as equals and protect each other. Luc learns that it was a leopard who killed Prof, not Drummer, and begins to understand more of the chimps' violent but loyal ways.

Just when Luc is starting to adjust to his new life in the jungle, Monsieur Tatagani tracks him down, angry that Prof used fake money to pay off Luc's debts. The chimps, who have now accepted Luc as part of their group, attack and kill Monsieur Tatagani and chase off his hired goons, who return to civilization and tell the tale of the boy who lives in the jungle with the apes. They attract the attention of a National Geographic journalist, who tracks Luc down and offers to bring him back to society. Luc has grown too attached to his new family, however, and ultimately decides to stay behind with them in the jungle.

More summaries and resources for teaching or studying Threatened.