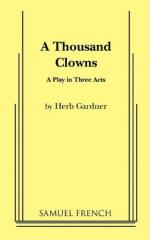 A man who uses humor as a defense against real feeling, personal vulnerability, and genuine relationships is the central character of this play, which tells the story of how he is confronted by several different aspects of reality and realizes that his tendency to make jokes is actually hindering him from living a successful life.

Before the play begins, we hear the sound of a children's television show, "Chuckles the Chipmunk," featuring the childlike central character playing with a group of screaming youngsters. As the lights come up, we see a 12-year-old-boy, Nick, watching the show on television and commenting on how bad it is.

Murray enters, barely awake and making jokes about the kids on the TV actually being in the living room. His conversation with Nick reveals that Nick is extremely intelligent for his age, that Murray used to...