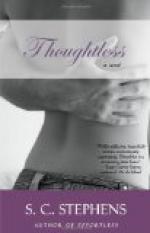 This Study Guide consists of approximately 71 pages of chapter summaries, quotes, character analysis, themes, and more - everything you need to sharpen your knowledge of Thoughtless.

This detailed literature summary also contains Quotes and a Free Quiz on Thoughtless by .

Thoughtless by S.C. Stephens is a story about a young lady named Kiera Allen who falls in love with Denny Harris, an assistant teacher in her college. Harris had come there from Australia with his aunt. At first, he was there to help his aunt get settled. Then, he decided to stay. Their relationship is Kiera’s first serious relationship, and she has eyes for no other. Then, Denny is offered an internship in Seattle. It takes little time before Kiera’s life is in turmoil and her emotions in upheaval.

Before they move to Seattle, Denny and Kiera date for two years. Kiera is still living with her family, and Denny is living with his aunt. When Denny is offered his dream job, Kiera works quickly to secure a scholarship in Seattle and makes the decision to go with him, despite her family’s disappointment. Denny and Kiera drive from Ohio to Seattle and move in with Denny’s friend Kellan Kyle. Kellan, a talented singer in an up and coming band, sees something in Kiera and Denny that he has never seen before – love. Having come from an abusive family life, Kellan is fascinated and intrigued by the relationship that Denny has with Kiera. He sees in them the kind of life he has always longed to be part of, and without warning, falls for Kiera himself. Looking back at it all later, he believes that his feelings for her began almost immediately. The result is an unbearable tug of war with Kiera in the middle.

When Denny is asked to take a contract out of town for his firm, helping to set up a new office for them, Kiera is unable to follow. She now has a job of her own working in Pete’s, which is the same bar that Kellan and the D-Bags play at each weekend. She is attending school on a scholarship. When she first hears Denny's news, Kiera is upset. However, since it is only for a short time, she agrees and Denny leaves. At first, she and Kellan engage in harmless flirting which makes the loneliness she feels a little easier to bear. Then one day Denny calls and announces that he has been offered a promotion and has accepted a two year contract to stay where he is. He can’t understand why Kiera is devastated, and in tears she tells him that she will not wait that long, breaking up with him. It is only moments later that she is crying in Kellan’s arms. From there, her feelings become more confused than ever. She sleeps with him for the first time, believing that she and Denny will never be together again. What she doesn’t expect is that Denny will quit his job in order to be with her. When he shows up, she is faced with making the most difficult decision of all. Whom should she choose? She realizes that she loves them both, but her confusion and inability to choose will almost cost her both men. It brings Denny and Kellan to blows. Kiera tries to intervene and ends up in the hospital. For a time, they both say goodbye to her, neither willing to sacrifice more than they already have. In the end, the depth of her love will help her get through the ordeal, although at times she doesn’t know how she will survive.

More summaries and resources for teaching or studying Thoughtless.