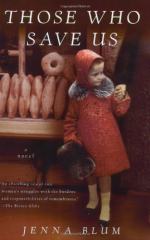 Those Who Save Us Summary & Study Guide

Those Who Save Us Summary & Study Guide Description

Those Who Save Us Summary & Study Guide includes comprehensive information and analysis to help you understand the book. This study guide contains the following sections:

This detailed literature summary also contains Quotes and a Free Quiz on Those Who Save Us by Jenna Blum.

“Those Who Save Us” draws together the life experiences of Anna and her daughter Trudy. Anna had lived through World War II in Germany. As a young woman, she conceived the child of Max, a Jewish doctor she had hidden in her home in an effort to protect him from the Nazis. Though her relationship with Max, Anna becomes involved in the Nazi resistance movement. After Max is turned into to the SS by Anna’s father, Anna flees to the home of the local baker, Frau Mathilde Staudt. Mathilde is also a member of the resistance and was working to have Max transported to Switzerland before he was captured. While living at the bakery with Mathilde, Anna delivers bread to the prisoners of the concentration camp.

After Anna gives birth to her daughter, Trudy, Mathilde is killed while attempting to deliver bread and rifles to the Red Triangles, political prisoners who are also part of the resistance. Alone and without a way to protect herself or her daughter, Anna becomes to mistress of the Obersturmfuhrer, a high ranking SS officer.

When the Americans finally defeat the Nazis, Anna finally leaves the Obersturmfuhrer, who no longer has power over her life. She soon meets an American soldier, Jack, whom she marries. The two move tp the United States with Trudy. There, Anna wishes to leave the past behind her for good. She refuses to speak of her past, thinking that this will allow it to die with the war.

Anna’s daughter, Trudy, bears little memory of her time in Germany. She longs for connection with her mother, who remains silent in an effort to avoid the past. Throughout her adulthood, Trudy works as a Professor of German History for a university in Minneapolis. In studying German History, she wishes to develop a deeper understanding of her mother and of her self.

Throughout the novel, Trudy’s desire to reconnect with her past in Germany leads her to carryout a project in which she interviews volunteers who lived through Wold War II in Germany. Through this project, she wishes to develop a deeper understanding of her own childhood during the war.

In her final interview, Trudy speaks with a man, Mr. Pfeffer, who worked in the resistance with Anna. In his interview, Trudy finally receives the answers she has been searching for all her life. In this information, she is finally granted peace from the ghosts of her past.

Those Who Save Us from BookRags. (c)2022 BookRags, Inc. All rights reserved.