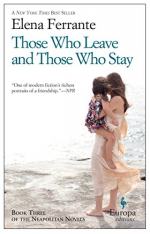 Those Who Leave and Those Who Stay Summary & Study Guide

Elena Ferrante
This Study Guide consists of approximately 74 pages of chapter summaries, quotes, character analysis, themes, and more - everything you need to sharpen your knowledge of Those Who Leave and Those Who Stay.

Those Who Leave and Those Who Stay Summary & Study Guide Description

Those Who Leave and Those Who Stay Summary & Study Guide includes comprehensive information and analysis to help you understand the book. This study guide contains the following sections:

This detailed literature summary also contains Quotes and a Free Quiz on Those Who Leave and Those Who Stay by Elena Ferrante.

In Those Who Leave and Those Who Stay, Elena Ferrante’s characters deal with love and strife in a changing world.

The narrator is Elena Greco, the brilliant writer who still struggles with her place in the world. Early in the novel she reconnects with Nino Sarratore, the young man from the neighborhood who has made himself a great name. He still holds a place in her heart. After her book is published to great success and receives a lot of attention, particularly its “racy” scenes, Elena marries Professor Pietro Airota and moves to Florence.

Elena plans to use birth control and start on a new novel, but her plans are derailed by an early pregnancy. Her new marriage is put to the test as both partners are struggling in their careers and dealing with a newborn. After the baby is finally weaned, Elena draws on inspiration from Lila’s life as a struggling factory worker to try a new novel; however, it only makes it as far as her mother-in-law Adele, who proclaims it poor, sensationalist writing. Elena’s fondness for her husband never makes it to the passion stage; he is devoted to their small family but is detached and dull. He shows no interest in Elena’s gifts, her career, or her devotion to politics. Their relationship begins to suffer. Another child comes along, this one easier than the first, and Elena continues to struggle with significance and her ego.

A meeting with Pietro’s sister Mariarosa introduces Elena to the feminist cause, and there she finds her voice. As a model for her own life, Elena explores how women can only be defined in society by their men. In the midst of a creative frenzy that finally gives her life, Nino Sarratore shows up once more and plants small seeds of dissent in Elena’s heart. Next to Nino, Pietro looks even more drab and dull, while Nino is filled with vibrant ideas and political furor. Under Nino’s encouragement, Elena finishes her essay and it is brilliant. The two begin an affair that eventually ends with both of them leaving their families and traveling away together.

Throughout Elena’s narrative the reader gets small glimpses of Lila’s life. In the beginning of the novel, Lila lives in a squalid apartment with Enzo Scanno and her son. She works long hours at a sausage factory and is treated abominably. By chance she is introduced to a group of young, elite Communists, who wish to use Lila’s cleverness and natural leadership ability to infiltrate the workers union. Lila’s involvement causes a near physical and emotional breakdown, not to mention a fearful run-in with Michele Solara, who works for the Fascists.

With Elena’s assistance, Lila receives medical care, and is able to move with Enzo and her son to a better apartment closer to the neighborhood. Adele Airota connects Enzo with a computer expert, and as the narrative progresses he and Lila both are given better jobs that pay excellent wages. Towards the end of the story, Lila takes a job working for Michele Solara, who has above all things sought to control Lila. It is a tenuous partnership. For Lila, the story ends with Michele’s mother’s murder; the stage is set for the chaos of the fourth novel.

More summaries and resources for teaching or studying Those Who Leave and Those Who Stay.

Those Who Leave and Those Who Stay from BookRags. (c)2022 BookRags, Inc. All rights reserved.