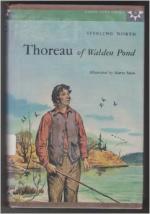 Born on July 12, 1817, Thoreau lived in one of the most intellectual communities of any era in American history, mid-nineteenth-century Concord, Massachusetts. He was friends with many of the authors and philosophers associated with the movement called New England transcendentalism, including Ralph Waldo Emerson, Bronson Alcott, William Ellery Charming, and Margaret Fuller.

Emerson, Thoreau's friend and mentor, is considered the father of New England transcendentalism, which championed nature over the city, the individual over the masses, and intuition over reason. Although Thoreau's literary philosophy is distinctly his own, it reflects the ideas of the transcendentalists. North emphasizes the influence of nature on Thoreau, describing the beauty and splendor of the region surrounding Concord, specifically Walden Pond. North also provides vivid descriptions of the Maine wilderness, where Thoreau developed into an ardent naturalist and conservationist.