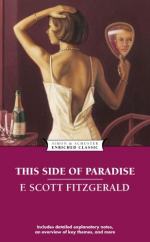 Books Like This Side of Paradise by F. Scott Fitzgerald | Suggested Reading

F. Scott Fitzgerald
This Study Guide consists of approximately 54 pages of chapter summaries, quotes, character analysis, themes, and more - everything you need to sharpen your knowledge of This Side of Paradise.

Fitzgerald's most famous novel, The Great Gatsby (1925), is the story of the rise and fall of Jay Gatsby together with the boredom, seduction, and moral irresponsibility of the American aristocracy.

Algernon Charles Swinburne's Selected Poems (1987), edited by L. M. Findlay, is an excellent introduction to the nineteenth-century visionary poet who refused to be categorized into his time.

Ernest Hemingway's A Moveable Feast (1964) is a compelling autobiographical account of the expatriate modernist writing community living in Paris in the 1920s, and it includes stories of Fitzgerald and his wife Zelda during their time in Europe.

The Time Machine (1895), by H. G. Wells, is a science fiction novel about an inventor who claims to have traveled to the distant future to learn in what direction nineteenth-century ideas are taking humankind, and its political and social commentary influenced Fitzgerald.

Virginia Woolf's To the...

More summaries and resources for teaching or studying This Side of Paradise.

This Side of Paradise from BookRags. (c)2022 BookRags, Inc. All rights reserved.