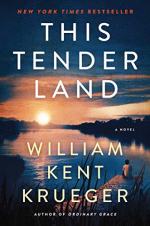 This detailed literature summary also contains Quotes and a Free Quiz on This Tender Land by William Kent Krueger.

The following version of this book was used to create the guide: Krueger, William Kent. This Tender Land. Simon & Schuster, Inc., 2019.

In This Tender Land, after 12-year-old Odie O'Banion and older his brother, Albert, were orphaned, the operators of Lincoln Indian Training School, Thelma and Clyde Brickman took them in. However, Lincoln School was a cruel and unforgiving place. Eager to be rid of their oppressors, Odie, Albert, and their friend Mose, rescued another recent orphan and friend, Emmy Frost. Before leaving they stole the contents of the Brickmans' safe. They then ventured onto the Minnesota River in a canoe.

Shortly into their trip, they discovered that the safe contents include over $200 and a series of letters the orphans' family members had sent to the Brickmans. Albert found one letter from their Aunt Julia in Saint Louis. They all decided they could go to her house and find a new home. While sleeping on the bank of the river, the children were awoken by the startling appearance of a one-eyed man named Jack. Jack dragged them back to his farm where he locked Emmy in the house and forced the boys to work his orchards. The longer they stayed with Jack, the more volatile and unpredictable he became. His drinking did not help. Odie eventually discovered Jack's wife and daughter had left him. One night, Jack became so violent, Odie shot him in the chest and the friends fled in their canoe.

Odie was haunted by the murder, believing Jack was a good man at heart, but that his sorrow had altered him. Eventually the companions reached the next town, New Bremen. While on the bank, they overheard an angelic voice. Following the singing, they discovered a revival meeting where a woman, Sister Eve, was speaking about redemption. During the meeting Sister Eve healed numerous ailing people. The children were drawn to her immediately. In the coming days, they join the crusade, feeling they have found a sense of family and home with Sister Eve and her troop. Odie's trust, however, fractured when he found evidence of Sister Eve's deception. He believed she was paying off the people she was supposedly healing. So furious with her for lying, Odie unleashed one of the crusade's poisonous snakes on her. The snake failed to bite Sister Eve, and struck Albert instead. Believing his brother would die, Odie despaired, blaming himself for every misfortune he and his friends had suffered. However, Albert recovered. Hearing word of Albert's miraculous survival, the Brickmans turned up in town, forcing the four friends to flee again.

The next place they landed was Mankato. In Mankato, Odie stumbled upon an encampment where he met a young girl, Maybeth Schofield, and her family. After spending many days in their company, Odie learned of their many struggles, and their difficulty to get to Chicago with the rest of their family. Wanting to help, Odie gave Mr. Schofield his remaining $40 for gas. He realized then that his generosity would lead to Maybeth's departure and the end of their short relationship.

Heartbroken by losing Maybeth, Odie struggled to keep his spirits up. The friends ventured on to the West Side Flats, where they met and worked for a woman named Gertie in her restaurant. Albert established a friendship with two boat repairmen, and grew comfortable. Mose and Emmy also wanted to continue living at the Flats. However, Odie was determined to get to Saint Louis. Feeling alone, he continued on alone. In Saint Louis, he was shocked to discover his aunt ran a brothel. Reencountering Sister Eve in town, Odie decided he would rejoin the crusade and leave his aunt. Before he could tell her his plan, however, Aunt Julia revealed that she was Odie's real mother. Shortly thereafter, the Brickmans arrived. Thelma and Julia, having once worked together got into a dramatic and violent argument that led to both falling out a window. Thelma died, but Julia survived.

In the years that followed, Julia created a home for Odie, Albert, Mose, and Julia, converting her house into a dress shop.