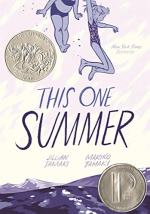 Related Topics
Laura Dean Keeps Breaking Up With Me

This One Summer Summary & Study Guide

Mariko Tamaki
This Study Guide consists of approximately 30 pages of chapter summaries, quotes, character analysis, themes, and more - everything you need to sharpen your knowledge of This One Summer.

This One Summer Summary & Study Guide includes comprehensive information and analysis to help you understand the book. This study guide contains the following sections:

This detailed literature summary also contains Quotes and a Free Quiz on This One Summer by Mariko Tamaki.

“This One Summer” is a young adult graphic novel by Jillian Tamaki and Mariko Tamaki that follows young Rose Wallace as she navigates family difficulties, friendship, and local drama while on summer vacation at Lake Awago. Rose has spent summers at Lake Awago for as long as she can remember. There, she has a best summer friend, Windy, who is a year and-a-half younger than Rose. The two girls are inseparable, doing everything together from swimming to exploring to watching horror movies.

The summer begins normally enough. Rose and Windy fall right into their normal summer routines with their families. They swim, cook out, go for walks, explore, collect pebbles, shells, glass, and other small items. They talk about their summers, about how they both want to grow boobs, and about their adventures from past summers. As the girls begin to rent horror movies from Brewster’s, the lake town’s sole business, Rose quickly develops a crush on Duncan, a teenager who works there.

But not everything is so gentle. As time passes, Rose’s crush on Duncan grows. Rose and Windy spend more and more time at Brewster’s, during which time they hear local teenagers cursing, using words like “slut”, and talking about sexual things such as blow jobs. This causes Rose and Windy to reflect on how they might turn out one day. Rose, who knows her parents have been distant for about a year, is stunned to see that her parents not only actively argue, but that her father leaves to go home for a few days. It upsets her, and causes her to argue with her mother. Rose accuses her mother of never wanting to be happy, of always making others miserable, and that it should be her and not her father who has gone home for a few days.

Rose and Windy also come to learn about local drama as it unfolds. Duncan’s girlfriend, Jenny, is pregnant. Duncan is seen attempting to avoid his responsibilities time and time again, not wanting to go with Jenny to the doctor, disbelieving that she even is pregnant, and gossiping with his friends about the idea that the baby – if there is one – belongs to someone else. At the summer cottage, Rose’s father returns, but barely speaks to her mother.

As the summer draws to a close, Jenny finally confronts Duncan about his responsibilities. Duncan tells her to get lost. Meanwhile, Rose, Windy, and their families enjoy their final bonfire together. It is then that Rose discovers Jenny’s friends are looking for her. Rose sees a drunken Jenny sinking in the ocean, and screams for her mom. Rose’s mom rushes to the rescue, diving in to save Jenny from drowning. Later that night, Rose learns that her mother suffered a miscarriage while swimming the summer before – and so has not been right since. Rose and her mom come to peace with one another. Rose and Windy say good bye and look forward to next summer. Rose hopes she will have boobs by then.

More summaries and resources for teaching or studying This One Summer.

This One Summer from BookRags. (c)2022 BookRags, Inc. All rights reserved.