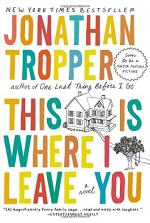 Related Topics
One Last Thing Before I Go

This Is Where I Leave You Summary & Study Guide

Jonathan Tropper
This Study Guide consists of approximately 52 pages of chapter summaries, quotes, character analysis, themes, and more - everything you need to sharpen your knowledge of This Is Where I Leave You.

This Is Where I Leave You Summary & Study Guide Description

This Is Where I Leave You Summary & Study Guide includes comprehensive information and analysis to help you understand the book. This study guide contains the following sections:

This detailed literature summary also contains Quotes and a Free Quiz on This Is Where I Leave You by Jonathan Tropper.

This Is Where I Leave You, by Jonathan Tropper, begins as Judd Foxman answers a call from his sister, Wendy. Wendy tells her brother that their father has died and that the funeral is the next day. She also tells him that their father's last wish was that they sit Shiva, a Jewish mourning ritual that lasts seven days. As Mort was an atheist, Judd finds it hard to believe that this was his last wish. However, he agrees to go through with it.

The next day Judd is about to leave when his estranged wife, Jen, shows up at his basement apartment. Judd has been living in the apartment since he found Jen having sex with his boss, Wade. Jen had been having an affair with Wade for a year, but Judd knew nothing about it until he found them in bed. Jen has come to tell Judd that she is pregnant. She was pregnant once before, but she lost the baby. Since Judd thinks that the baby is Wade's, he makes a remark that hurts Jen and leaves.

Everyone is at the funeral except for Mort's youngest son, Phillip. The rabbi presiding over the service is an old friend of Judd's older brother, Paul. When they were in high school, the rabbi's nickname was Boner. Paul gives the eulogy. Finally, Phillip arrives. Before leaving, he breaks down and cries. He is the only member of the family who does so.

Back at the house, an old friend of Judd's mother, Hillary, and her son greet them. The woman's name is Linda and her son's name is Horry. Horry suffers from brain damage due to being hit in the head during a bar fight. Before then, he had dated Judd's sister, Wendy. He is happy to see Wendy, and she cries when she sees him.

The next day Boner comes by to prepare the house for sitting Shiva. The siblings try to get out of doing it, but Hillary comes into the room and forces them to stay. People start coming to the house. At one point, Judd decides he needs a break and goes into the kitchen. Linda is there, and he confides in her. She knows that he wants to go out, so she asks him to pick up Horry who works at the store which Mort owns and operates with Paul's help. He picks him up. Horry tells Judd that Penny, a girl Judd used to like, works in the store. He suggests that Judd go in and talk to her. Judd says that he will some other time. That night, Judd has a recurring dream in which he has a prosthetic leg instead of a real one. Judd's dream returns throughout his stay at the house, but they change in content and meaning as he grows.

Judd finally does talk to Penny, and the two go out. The renewal of their relationship comes to an abrupt end, however, when Jen calls while Judd is out with Penny. As it turns out, Judd (not Wade) is the baby's father. Jen calls Judd because she thinks that she might be in danger of losing the baby. He meets her at the hospital and everything is fine. Upon hearing the baby's heartbeat, he begins to accept the fact that he is going to be a father for the first time.

During the seven days, Judd makes up with Paul whose baseball career ended before it even started due to a Rottweiler attack that would not have happened if Paul had not tried to get revenge for Judd's sake. Paul accepts the fact that he needs his family to help run the business and agrees to let Phillip work for him as long as Judd shares the burden. Wendy puts her feeling for Horry in place. The children find out that Linda and Hillary are a couple – a relationship that Mort approved of.

When the seven days are finally over, Judd goes to Maine to consider his options in life.

More summaries and resources for teaching or studying This Is Where I Leave You.

This Is Where I Leave You from BookRags. (c)2022 BookRags, Inc. All rights reserved.