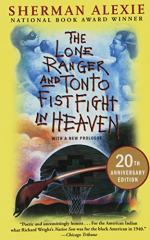 Related Topics
Because My Father Always Said He Was the Only Indian Who Saw Jimi Hendrix Play 'The Star-Spangled Banner' at Woodstock
Reservation Blues
Sherman Alexie
Ten Little Indians
The Absolutely True Diary of a Part-time Indian
The Lone Ranger and Tonto Fistfight in Heaven
What You Pawn I Will Redeem
War Dances
You Don't Have to Say You Love Me
Happy Trails
Clean, Cleaner, Cleanest

This Is What It Means to Say Phoenix, Arizona Quotes

Sherman Alexie
This Study Guide consists of approximately 22 pages of chapter summaries, quotes, character analysis, themes, and more - everything you need to sharpen your knowledge of This Is What It Means to Say Phoenix, Arizona.

Victor hadn’t seen his father in a few years, only talked to him on the telephone once or twice, but there still was a genetic pain, which was soon to be pain as real and immediate as a broken bone.
-- Narration (N/A)

Importance: This sentence appears in the story's opening paragraph and establishes the estrangement between Victor and his father. As the reader soon learns, Victor's father left the reservation when Victor was a child. However, as this quotation suggests, Victor still feels a sense of pain and grief upon learning of his father's death, as interpersonal attachments (especially familial ones) may retain essential meaning.

You know there ain’t anybody around here with that kind of money.
-- Victor (N/A)

Importance: Victor makes this statement while speaking with the Tribal Council. The council is only able to contribute $100 towards the cost of transporting Victor's father's remains, and they suggest that he borrow the rest from...

More summaries and resources for teaching or studying This Is What It Means to Say Phoenix, Arizona.

This Is What It Means to Say Phoenix, Arizona from BookRags. (c)2021 BookRags, Inc. All rights reserved.