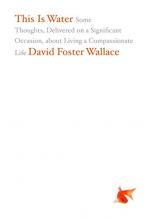 This Is Water: Some Thoughts, Delivered on a Significant Occasion, About Living a Compassionate Life Summary & Study Guide

David Foster Wallace
This Study Guide consists of approximately 21 pages of chapter summaries, quotes, character analysis, themes, and more - everything you need to sharpen your knowledge of This Is Water.

This Is Water: Some Thoughts, Delivered on a Significant Occasion, About Living a Compassionate Life Summary & Study Guide Description

This Is Water: Some Thoughts, Delivered on a Significant Occasion, About Living a Compassionate Life Summary & Study Guide includes comprehensive information and analysis to help you understand the book. This study guide contains the following sections:

This detailed literature summary also contains Topics for Discussion on This Is Water: Some Thoughts, Delivered on a Significant Occasion, About Living a Compassionate Life by David Foster Wallace.

The following version of this book was used to create this study guide: Wallace, David Foster. This Is Water. New York: Little, Brown and Company, 2017.

This Is Water was originally a commencement address delivered by author David Foster Wallace at Kenyon College in May of 2005. Wallace opens the speech with a parable about a fish who is unaware that he is swimming in water, thus signifying the idea that the most important truths often become obscure due to their ubiquitous importance. Wallace then recounts a parable in which an atheist becomes stranded in the Alaskan wilderness and prays to God for help. However, when he is rescued by Eskimos, he does not attribute the rescue to divine intervention. This parable demonstrates the idea that people have personal agency over how they choose to interpret and draw meaning from experiences. Wallace then goes on to state that people’s default state is one of self-centeredness, simply due to the fact that all of a person’s experiences are filtered through their own perspective.

Wallace begins to weave together these prior points by stating that in order to have a fulfilling life, one must exercise personal agency in order to work against default habits of selfishness, as self-centeredness inherently breeds internal misery and isolation. Wallace elaborates upon these points by stating that much of adult life is defined by drudgery and mundane frustrations. Wallace gives the example of going to a grocery store after work and becoming frustrated with traffic and with the crowds in the store. He defines the frustrations of such a situation as originating from a failure to consider these events from the perspectives of the other people involved. Wallace goes on to state that one must exercise personal choice in order to act against these habits of selfishness and frustration. He encourages his audience to be aware of these destructive habits and to instead adjust their thinking to more charitable and compassionate modes of thinking in order to form a sense of deeper harmony with the world at large.

Wallace reiterates the idea that people are able to make conscious decisions about how they choose to interpret and react to the events of their personal experiences. Wallace states that these decisions have the power to transform mundane, frustrating drudgery into highly fulfilling and even transcendent experiences. Wallace goes on to state that the idea of worship is a constant in human experience. In other words, people always choose to value something specific as a principle source of meaning in one’s life. Wallace warns that worshipping transitory things, such as power, money, beauty, and material wealth, only leads to misery. Wallace recommends worshipping non-transitory things such as ethical principles. Wallace concludes his speech by reiterating the importance of awareness, both regarding oneself and others. Wallace advocates for compassion as an overarching principle that will help to guide one away from destructive selfishness and towards healthier, more constructive modes of thought.

More summaries and resources for teaching or studying This Is Water: Some Thoughts, Delivered on a Significant Occasion, About Living a Compassionate Life.

This Is Water: Some Thoughts, Delivered on a Significant Occasion, About Living a Compassionate Life from BookRags. (c)2022 BookRags, Inc. All rights reserved.