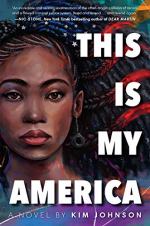 Plot Summary
+Chapters Summary and Analysis
"Ready. Set. Go." - "The Apple of Our Eye"
"Mission (Un)Accomplished" - "The Fast and the Furious"
"Right to Remain Silent" - "Gotcha!"
"Like Father, Like Son" - "Well I'll Be Damned"
"Outlawz" - "Crash and Burn"
"We Got a Situation" - "One Day at a Time"
"Eagle Has Landed" - "Kill Two Birds With One Stone"
"I Ain't Never Scared" - "Two Months Later"
Free Quiz
Characters
Symbols and Symbolism
Settings
Themes and Motifs
Styles
Quotes
Order our This Is My America Study Guide

This Is My America Summary & Study Guide

Kim Johnson
This Study Guide consists of approximately 55 pages of chapter summaries, quotes, character analysis, themes, and more - everything you need to sharpen your knowledge of This Is My America.

This Is My America Summary & Study Guide Description

This Is My America Summary & Study Guide includes comprehensive information and analysis to help you understand the book. This study guide contains the following sections:

This detailed literature summary also contains Quotes and a Free Quiz on This Is My America by Kim Johnson.

The following version of this book was used to create this study guide: Johnson, Kim. This Is My America. Penguin Random House, 2020. Print.

The novel is told in the first-person present and is narrated by the main character, sixteen-year-old Tracy. Before the first chapter, a letter from Tracy to Innocence X, a nonprofit organization that helps overturn unjust convictions is presented. Tracy had been writing to Stephen Jones, the founder of Innocence X, for years. Seven years ago, her father was arrested for the murder of Mr. Davidson, who was his business partner in real estate development, and Mrs. Davidson. Although there was no evidence linking him to the crime, and although the entire family claimed to have been at home with their father the whole night, Tracy’s father was convicted and sentenced to death in prison. Tracy begs Stephen Jones to take on her father’s case because he only has 275 days left until his execution. As the first chapter begins, Tracy tells us that she and her family had moved from Louisiana to Texas after Hurricane Veronica had destroyed their community. Shortly after, her father had been arrested and her family had been thrown into chaos. Her father had been working out a real estate development plan with Mr. Davidson. They had argued because Mr. Davidson did not want to work with her father’s business partner, Mr. Ridges. The police claimed the argument had led to the murders. They arrested Tracy’s father first, then went to arrest Mr. Ridges, but he barricaded himself in his home. The police started shooting, wounding his son, Quincy, and killing Mr. Ridges.

Tracy’s older brother, Jamal, has made the best of his situation. He is a senior in high school and plans on attending Baylor on a track scholarship. He also works at a radio station as an audio engineer to help pay the family’s bills with his classmate, Angela Herron, who has an internship on The Susan Touric Show, a local news station that is interviewing Jamal on his achievements in track. Despite her family’s clear objections, Tracy takes the opportunity to appeal to the camera about her father’s case, ruining Jamal’s big moment and infuriating her family. Tracy goes home with her mother and little sister, Corrinne, but since neither of them will talk to her she goes to her friend Tasha’s house and asks her for a ride to the prison so she can visit her father. He laughs off her stunt on television, but he asks her to start preparing herself for his death. Tracy refuses, and writes another letter to Innocence X.

On Tuesday morning, Tracy meets up with her best friend, Dean Evans. Her mother works for his mother at Evans Antiques. Tracy likes Dean, but she feels like his mother disapproves of her because of her race. Tracy’s mother cautions her from dating a white boy, so Tracy keeps her feelings to herself. They go to school and Tracy learns that Natalie Hanes, a writer for the school newspaper, is trying to get the editor spot next year. Tracy wants the position, so she goes to talk to Angela, who is the current editor. She sees Angela arguing with her boyfriend, Chris Brighton. After he leaves, Angela says she will help Tracy get the editor spot if she helps her work on a secret editorial she has planned. Tracy agrees, and the two girls plan to meet the following morning. After school, Tracy walks to the radio station to apologize to Jamal for ruining his moment, but she sees him and Angela kissing. That night, Tracy goes to sleep early and wakes up in the middle of the night. She sees Jamal in the bathroom, washing blood off his face. She asks him what happened, but he refuses to talk to her. She goes back to bed, but the police cars arrive outside her house. She asks to examine the warrant so as to give Jamal time to run. By the time the police enter the house, Jamal is gone. Sheriff Brighton tells Tracy and her mother that Angela is dead and Jamal is wanted for her murder. He was at the crime scene, and his varsity jacket was found covering the body.

Tracy goes to Quincy’s house. Quincy and Jamal had remained best friends since childhood. Tracy had ditched him as a friend after he was shot and replaced him with Dean, who had been very sympathetic during her father’s trial. Quincy tells her that Jamal had come to his house on Tuesday night. He had left to meet Angela, but he had returned covered in blood. He said that he had found her at the Pike and tried to help her, but she died in his arms. Tracy returns to school. Quincy gives her a burner phone and tells her Jamal checks his phone once a day. Tracy learns that Natalie was voted editor. She looks in Angela’s desk in the newsroom and finds a note in her planner about an underground rally taking place at the Pike on Tuesday night. Tracy went to the Pike and found Angela’s phone. She breaks into it and finds texts from Angela to Jamal talking about Chris, a memory card, and the Pike. Tracy texts Jamal from the burner phone about the memory card. He asks her to go to the production room at the radio station and find it for him. He texts Quincy and tells him to help Tracy get the memory stick.

Stephen Jones’s son, Steve, arrives in town and surprises Tracy with the news that he is taking her father’s case, though he cannot help with Jamal’s. Tracy and Quincy sneak into the radio station and retrieve the memory stick. Tracy finds a bunch of pictures of Chris and other white young men at the Pike. Steve Jones rents out the loft above Evans Antiques. A man breaks into the office. Steve runs the plates and sees that they belong to a man who works for a conservative organization with ties to white supremacists. Tracy sees the man again and follows him. Up close, she recognizes him as Chris’s uncle and the Sheriff’s brother, Richard Brighton. Tracy and her family have dinner at home with Steve, Dean, and his family. Someone throws a brick through the window and lights a cross of fire in their front yard. Mr. Evans explains that the KKK had owned most of the land in Crowning Heights, which Mr. Davidson and Tracy’s father were attempting to develop together.

The next morning, Tracy spies Jamal breaking into their home for new clothes. She follows him and finds him hiding out at an old shack. She urges him to turn himself in, but he refuses. Tracy talks to Angela’s best friend, Mandy. Mandy tells her that Angela was investigating a hate group Chris was involved in. She had stolen a gun she found in Chris’s glove compartment that belonged to his uncle, Richard Brighton. She had met Chris on Tuesday night to give him the gun back so she could infiltrate the group and write a paper for her newspaper. Tracy and Quincy go to the Pike to look for the gun. They find it, then leave it where it is for the police to find. Chris arrives, and Tracy records him talking about how he needs to find the gun, or his uncle will get in trouble. The police arrive and take the gun in for tests.

Tracy goes home and texts Jamal to meet her there. He does so, but refuses to turn himself in. Quincy’s sister, Beverly, arrives. She is a police officer and insists that Jamal needs to come with her. More police arrive. She walks Jamal to the car, but Richard Brighton jumps out and yells, “Gun!” Beverly is shot in the shoulder and Jamal is taken to the sheriff’s office. Dean’s mother arrives at the station and tells the sheriff that she had seen Richard Brighton enter the Davidson’s shop on the day they died. Stephen Jones arrives in town and says he is going to take both cases on personally. He posits that Richard Brighton is guilty of the death of the Davidson’s and of Angela. The story becomes a national sensation. The charges against Jamal are dismissed. Tracy’s father wins his appeal and is set free. Tracy starts dating Quincy and decides to start a podcast about injustice.

More summaries and resources for teaching or studying This Is My America.

This Is My America from BookRags. (c)2022 BookRags, Inc. All rights reserved.