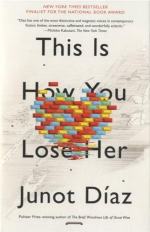 Related Topics
Drown
The Sun, the Moon, the Stars
The Brief Wondrous Life of Oscar Wao
How to Date a Brown Girl (Black Girl, White Girl, or Halfie)
Ysrael

This Is How You Lose Her Summary & Study Guide

This Is How You Lose Her Summary & Study Guide Description

This Is How You Lose Her Summary & Study Guide includes comprehensive information and analysis to help you understand the book. This study guide contains the following sections:

This detailed literature summary also contains Quotes and a Free Quiz on This Is How You Lose Her by Junot Díaz.

"This Is How You Lose Her" is a collection of short stories by Junot Diaz, centrally revolving around the main character, Yunior. Yunior grew up in the Dominican Republic, but moved to America at a young age. The majority of the stories center on his infidelities and the problems that he faces because of prejudice.

The first story, "The Sun, The Moon, The Stars" focuses around Yunior's post college life. Yunior had just broken up with his girlfriend, Magda. Their relationship fell apart when Magda discovered that Yunior had cheated on her with a girl from work, Cassandra. Yunior manages to get back together with Magda, but their relationship is strained. Yunior takes Magda on a vacation to his home of Santo Domingo to try and salvage their relationship.

"Nilda," the second story, takes place when Yunior is just about to enter high school. The story is mostly centered on his brother, Rafa, and Rafa’s girlfriend, Nilda. Yunior tries to befriend Nilda because he doesn’t want her to end up with his brother. Yunior believes that his brother is a monster and has seen from previous relationships how Rafa treats his women terribly. Things become even more complicated when Yunior finds out that Rafa has cancer.

"Alma" is the third and shortest story in the book and details Yunior’s very brief relationship with the titular character of the story, Alma. Yunior cheated on Alma, a fact that she discovered when she read through his journal. She humiliates Yunior, who lies and tries to convince Alma that what she read was just the draft of a story.

"Otravida, Otravez" is the only story in the book that isn’t about Yunior. The story focuses on another Dominican immigrant, Yasmin. Yasmin is in a relationship with a married man, Ramón. Ramón is still in communication with his family that he left behind in the Dominican Republic. Yasmin and Ramón end up buying a house together. They both find themselves yearning for more and missing their lives back in the Dominican Republic.

"Flaca" focuses on another one of Yunior’s many failed relationships. He met a girl that he nicknamed "Flaca" at school. She initially tries to fight against entering into a relationship, but the two end up getting together. Yunior’s friends dislike Flaca because of her race. The relationship ends up falling apart when Yunior wakes up one night and Flaca isn’t there. He never hears from her again.

"The Pura Principle" takes place shortly after Rafa discovers that he has cancer. He gets home after spending months in the hospital. He tries to get a legitimate job while Yunior is selling drugs. His cancer returns and he collapses at work. He’s helped by a workmate, Pura, an Indian with dreams of marrying someone to get her citizenship. Yunior’s mother hates Pura. Despite that, Rafa ends up marrying her. He’s kicked out of the house, but their mother continues to support Rafa. Rafa has a child with Pura. He ends up back in the hospital. Pura never visits and the two separate once a sick Rafa returns home.

"Invierno" is about Rafa and Yunior first meeting their father, who lived in America. Their father was incredibly strict and didn’t let any of the family members leave the house. Their mother struggled with being kept inside the house. During a strong snowstorm she finally goes outside of the house with her two sons and they explore the neighborhood together.

"Miss Lora" is about Yunior dealing with the death of his brother, Rafa. Yunior thought that the world was going to end, but the only person that would listen to him was his neighbor, Miss Lora. Yunior falls for Miss Lora, even though he already has a girlfriend. The two end up dating for several years. Yunior eventually gets over his fears and goes off to college. He later tries to find Miss Lora, but he doesn’t see her again.

The final story, "The Cheater’s Guide to Love," details Yunior’s adult life over the course of five years. During the first year his fiancé breaks up with him because he had been cheating on her for the past six years with over fifty women. The next year he spends in depression, with Yunior trying to get over things with the help of his friend, Elvis. He ends up getting into another relationship, but it ends when the woman he was involved with reads his journal and finds the racist things he was saying. She returns to his life, pregnant with a child. After she has the child, she leaves. During this time, Elvis discovers that his son was fathered by another man. The final years detail Yunior’s attempt to adjust to life in a racist Boston. He eventually decides to write about all of his failed relationships, deciding to call the book "The Cheater’s Guide to Love."