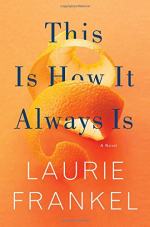 This Is How It Always Is Summary & Study Guide

Frankel, Laurie
This Study Guide consists of approximately 57 pages of chapter summaries, quotes, character analysis, themes, and more - everything you need to sharpen your knowledge of This Is How It Always Is.

This Is How It Always Is Summary & Study Guide Description

This Is How It Always Is Summary & Study Guide includes comprehensive information and analysis to help you understand the book. This study guide contains the following sections:

This detailed literature summary also contains Quotes and a Free Quiz on This Is How It Always Is by Frankel, Laurie.

The following version of this book was used to create this guide: Frankel, Laurie. This is How it Always Is: A Novel. New York: Flatiron Books, 2017.

The novel is told through the third-person omniscient perspective with a general focus on Rosie Walsh-Adams, a doctor and mother of five. At the opening of the novel, the narrator describes the family of Rosie and her husband, Penn. Flashbacks convey the history of Rosie and Penn's relationship and the events leading up to the birth of their fifth child, Claude. After having four sons, Rosie desperately wants a daughter. When Claude is born, it seems that her hopes are dashed. Once Claude learns to speak, however, it becomes apparent that his gender is more complicated than it first appeared. He states his wish to become a girl when he grows up, and begins to insist on wearing dresses.

Assuming that this is a phase, Rosie and her husband Penn react with kindness and acceptance. However, they discourage Claude from wearing girl’s clothes in public or to school. Claude persists, receiving scorn from the parents of other children at the public pool and resistance from his teacher on the first day of kindergarten. Concerned for his well-being, Rosie and Penn consult a therapist named Mr. Tongo, who diagnoses Claude with gender dysphoria and applauds his parents’ tolerance.

As a result of their work with Mr. Tongo, Rosie and Penn begin to realize that not only Claude’s gender, but also gender itself, is less rooted in binary divisions of male and female bodies and behaviors than commonly made out to be. Both of them struggle to come to terms with the implications of this in their own ways throughout the rest of the book. While Rosie, a doctor, agonizes over the challenges Claude will face when his body enters puberty, Penn, a novelist, takes the seemingly more optimistic approach of imagining alternatives for Claude’s future through fantasy. When telling his children bedtime stories, he uses characters named Grumwald and Princess Stephanie to metaphorically explore and resolve the challenges Claude faces as a transgender child. Claude rechristens himself Poppy and gradually adopts female pronouns.

After the father of Poppy’s classmate threatens the family with a gun after a play date and Rosie treats a beaten and shot transgender college student in the emergency room, the family decides to move to Seattle to provide a safer environment for Poppy. Their new neighbors have a daughter Poppy’s age, Aggie. After Rosie tells them that Poppy is transgender, the neighbors decide not to tell Aggie because they think it would be too confusing. Rosie and Penn go along with this and tell no one else in Seattle about Poppy’s past, though they intend to do so when she becomes older. Poppy and Aggie become best friends.

While Poppy goes through elementary school appearing to the rest of the world as a cisgender girl, Rosie and Penn disagree over what to do as she approaches puberty. Penn hopes that hormone blockers and surgery can save Poppy from hating her pubescent body, but Rosie has reservations about the potential side effects and the ethics of making irreversible changes to a child’s body, especially after Poppy learns about gender inequality and wonders if it would be more advantageous to be a boy.

However, it is just before Poppy enters puberty, when she is in fifth grade, that a crisis occurs. All of the sudden, the secret has gotten out, and all of the other children begin bullying Poppy about her body. Even Aggie rejects Poppy for not telling her about her past. Devastated, Poppy cuts off all of her hair and isolates herself in her room for a week.

Rosie agrees to volunteer at a clinic in Thailand and brings Poppy, hoping that leaving Seattle will ease Poppy’s depression. Believing that she can no longer be who she wants to be, Poppy asks to be called Claude again. Rosie works with and befriends a Thai medic, K, who eventually reveals herself to be transgender as well. K explains to Rosie that she views her body’s sex is a temporary condition of her reincarnated soul. She describes the Buddhist notion of individuals as constantly changing on their way to enlightenment, subject to no fixed categories, including gender. Rosie eventually realizes that accepting this fluidity and trusting Claude to find Claude’s own way is the best approach to her transgender child’s future.

Meanwhile, Claude also learns about Buddhism from the Thai students he has been assigned to teach English, and notices that images of the enlightened Buddha have feminine characteristics. In Thailand, he also encounters a sign for a gender-neutral bathroom for the first time. After Rosie acknowledges to Claude that Poppy and Claude can co-exist, the two return home determined to defy American assumptions about gender. Their return coincides with Penn having ended his novel, The Adventures of Grumwald and Princess Stephanie, with the revelation that Grumwald is Princess Stephanie; he transforms into her at night. Rather than taking a witch’s offer to stop the transformations, Grumwald chooses to be both at once.

Poppy returns to school for a Valentine’s Day dance. One of the boys who bullied her apologizes to her and asks her for a dance. Afterward, Poppy and Aggie reconcile in the girls’ bathroom. Rosie and Penn, who are chaperoning, also dance with each other and share the insights they have gained since Rosie and Poppy left for Thailand.

More summaries and resources for teaching or studying This Is How It Always Is.

This Is How It Always Is from BookRags. (c)2022 BookRags, Inc. All rights reserved.