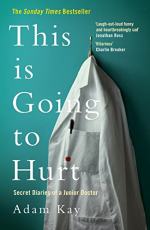 This Is Going to Hurt Setting & Symbolism

Adam Kay
This Study Guide consists of approximately 51 pages of chapter summaries, quotes, character analysis, themes, and more - everything you need to sharpen your knowledge of This Is Going to Hurt.

The cards that Kay receives throughout the novel are important because they embody the theme of praise. One of Kay's primary arguments throughout This is Going to Hurt is that doctors are tremendously under-appreciated. These moments when he receives recognition from his patients is important because it not only solidifies this theme, but also counters it. As Kay tells the reader, despite the lack of praise given to doctors by the institution itself, "patients tended to get it, though" (89). He describes the cards he receives the "little fist bumps that kept me going" (89). Ultimately, cards play an important literal role in Kay's life as a doctor while simultaneously acting as symbols for his theme of appreciation.

The apartment that Kay fails to get with H is important because it signals the end of their relationship. As the novel progresses, Kay's relationship with H begins to...

More summaries and resources for teaching or studying This Is Going to Hurt.

This Is Going to Hurt from BookRags. (c)2022 BookRags, Inc. All rights reserved.