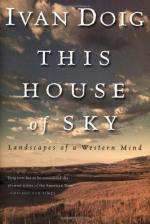 This House of Sky: Landscapes of a Western Mind Themes

Ivan Doig
This Study Guide consists of approximately 30 pages of chapter summaries, quotes, character analysis, themes, and more - everything you need to sharpen your knowledge of This House of Sky.

Ranching is one of the main themes of this book. This had its root in the original homesteading plans set out by the American government in an effort to take over the region from the natives. Encouraging settlement and figuring out what would make it profitable for people to live there was a necessity.

Much of the immigration came from Scotland. They were mainly lowland Scotts; they were already accustomed to working sheep but needed to figure out how to work the new terrain. During the fifty years from the 1860s to 1910 immigrants tried this. As it turned out, it was tough going. The idea that there were would be a large number of land owners running relatively small farms did not work. The majority of the land wound up being owned by a rather small number of people.

This situation forced the bulk of the people living...

More summaries and resources for teaching or studying This House of Sky: Landscapes of a Western Mind.

This House of Sky: Landscapes of a Western Mind from BookRags. (c)2021 BookRags, Inc. All rights reserved.