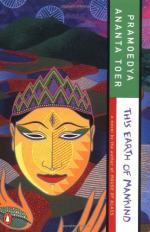 This Earth of Mankind Summary & Study Guide includes comprehensive information and analysis to help you understand the book. This study guide contains the following sections:

This detailed literature summary also contains Topics for Discussion and a Free Quiz on This Earth of Mankind by Pramoedya Ananta Toer.

In Pramoedya Ananta Toer's, This Earth of Mankind, the protagonist comes of age against the backdrop of a colonial Java being ruled by the Dutch. Minke introduces himself and then launches into his story. His story is essentially a love story. He sets the backdrop of his class and education, and then moves into the first meeting of the Mellema family.

The Mellema family consists of daughter Annelies, son Robert, Mistress Nyai Ontosoroh, and Mr. Mellema. Minke is awestruck by the beauty of Annelies at his first meeting. He gets to meet her because a classmate, Robert Suurhof, invites him to come along. Suurhof's goal is actually to humiliate Minke, but to Suurhof's surprise, Robert Mellema grudgingly invites Minke into his home, and to his greater surprise, Annelies becomes smitten with Minke and her mother also approves.

Thus, Minke is brought into the Mellema family's life, although he has doubts about them. He consults with his friend and business partner, a French artist named Jean Marais, who advises him not to judge the family based on pre-conceived notions, but rather to spend time getting to know the family and then make a judgment call. Minke does this, and discovers that Nyai is self-educated, follows many European customs, and runs the successful family business. He moves into the family home at her invitation, and develops a deep bond with Annelies, while Robert Mellema becomes increasingly jealous of him. Minke continues his studies at school while living with the Mellema's, but one day gets taken away by the police, without warning. The police take him to his father, who has arranged for the police to bring him. His father has been promoted, and wants Minke to be the translator at his ceremony. While staying with his family, Minke makes new friends of a governing official's Dutch daughters.

Upon his return to Surabaya, Minke thinks he is being followed by a Chinese man. His suspicions are confirmed when the Mellema family guard, Darsam, tells him that Robert has ordered Darsam to kill Minke. Darsam is loyal only to Nyai, however, and as Nyai treats Minke like a son, Darsam has sworn to protect him. Nonetheless, Minke decides he should live at his boardinghouse for the time being. He returns to school and tries to concentrate on his studies.

Minke receives letters from Nyai imploring him to return to her home because of Annelies' declining health. Eventually, Minke can no longer stay away and visits her. He is charged by the family doctor with the task of nursing her back to health, for it seems that only his love will cure Annelies. Thus he begins living with the Mellema's again. He eventually marries Annelies, and shares much happiness with her for a few months.

However, the happiness is short-lived when Herman Mellema is discovered dead and shortly after, his son Maurits takes the family to court to get the family business and have control of Annelies' future. Minke, Nyai and their friends fight the courts, but are powerless to change the decision. Annelies will be shipped to the Netherlands, and her marriage with Minke is ruled invalid since she is not legitimate and it was not a Christian marriage or sanctioned by the government. In the end, Nyai and Minke must watch her sail away, and thus the novel ends.

This Earth of Mankind from BookRags. (c)2022 BookRags, Inc. All rights reserved.