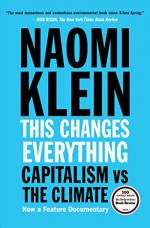 This Changes Everything Summary & Study Guide

This Changes Everything Summary & Study Guide includes comprehensive information and analysis to help you understand the book. This study guide contains the following sections:

This detailed literature summary also contains Topics for Discussion on This Changes Everything by Naomi Klein.

Naomi Klein took five years to write This Changes Everything. Her book is an exploration of all sides of the climate change debate and of the complexities, misinformation and the unknown that surrounds it. As a journalist, Klein set out to get every viewpoint about the topic. She attended a meeting of the Heartlands Institute which she describes as a right-wing think tank that basically doesn’t believe that climate change is happening or that if it is, it is a cyclic process that occurs naturally and that man’s activities have nothing to do with it; some right-wingers believe climate change is a hoax designed to take freedom away and turn democracies into Marxist socialistic societies.

Klein moves on to climate scientists, 97% of whom disagree with the conservatives. The scientists have amassed indisputable evidence that the earth is struggling to survive against the onslaught of greenhouse gas emissions that is impacting the entire earth and all its plants and creatures. Scientists have developed computer models that present dire outcomes for the earth should their warnings be ignored. The UN has developed international target emissions reductions for the entire world that, according to scientists, must be met within the next decade. The goal of the emissions reduction is to keep warming under 2 degrees Celsius. Anything above that exacerbates what is already a crisis. There is no punishment or penalty to those who do not meet their goals since the agreement signed in Copenhagen by major polluters including the U.S. and China is non-binding. However, Klein points out, the punishment that will be meted out for violations of the agreement will be the increased stress on a failing planet.

Activists, scientists and some governments are striving to find renewable energy solutions to subvert global reliance on the fossil fuel industry. However, the fossil fuel industry is a shining beacon of capitalism, and, as conservative Margaret Thatcher often said, there is no alternative to “market fundamentalism.” In other words, governments need to stay out of the operations of private companies. Sir Francis Bacon was the first climate-change denier. He advocated pounding the earth for all it was worth. Bacon believed the planet was there for man to exploit - that business of man having stewardship over the earth was absurd. Klein states that modern conservatives who back big oil and coal and the billionaires who profit from them were passed the torch from Bacon and believe that the earth will continue to serve man and that resources are basically limitless.

Although climate-change activism died down for a while, it is back in full force. Klein writes how, unexpectedly, it is the Indigenous people of the world who have taken the lead in protesting, blockading and fighting big energy in court with many decisions handed down in their favor. From the Cheyenne and Lakota in Canada and the U.S. to the Amazon Ecuadorians, the Indigenous people are clinging to their pristine land and putting up a fight against those who would destroy it.

Environmentalists understand the brick wall they face in dealing with Big Oil which is just as determined to continue drilling as they are to ban it. Klein states that in order to adequately address the perils of climate-change an economic revolution is in order. Capitalism which focuses on making profit and the efforts to save the planet are completely at odds. The development of an alternate economy is as vital as the development of climate change solutions.

This Changes Everything from BookRags. (c)2022 BookRags, Inc. All rights reserved.