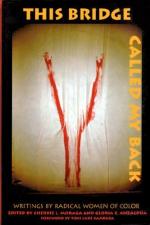 Plot Summary
+Chapters Summary and Analysis
Introduction and Children Passing in the Streets: The Roots of Our Radicalism
Entering the Lives of Others: Theory in the Flesh
And When you Leave, Take Your Pictures with You: Racism in the Women's Movement
Between the Lines: On Culture, Class and Homophobia
Speaking in Tongues: The Third World Woman Writer
El Mundo Zurdo: The Vision
Free Quiz
Characters
Objects/Places
Themes
Style
Quotes
Topics for Discussion
Order our This Bridge Called My Back: Writings by Radical Women of Color Study Guide

This Bridge Called My Back: Writings by Radical Women of Color Summary & Study Guide

Cherríe Moraga
This Study Guide consists of approximately 34 pages of chapter summaries, quotes, character analysis, themes, and more - everything you need to sharpen your knowledge of This Bridge Called My Back.

This Bridge Called My Back: Writings by Radical Women of Color Summary & Study Guide Description

This Bridge Called My Back: Writings by Radical Women of Color Summary & Study Guide includes comprehensive information and analysis to help you understand the book. This study guide contains the following sections:

This detailed literature summary also contains Topics for Discussion and a Free Quiz on This Bridge Called My Back: Writings by Radical Women of Color by Cherríe Moraga.

"This Bridge Called My Back" is a compilation of poetry and prose writings from feminists from cultures considered in the late-1970s to be Third World. That category included virtually every skin color except white, and dramatically changed the experiences for those American women. Several of them were also identified as lesbians meaning their oppression was two-pronged, frequently coming from inside their culture just as sharply as it came from outside it.

The first section of the book is called "Children Passing in the Streets: The Roots of Our Radicalism" and contains the stories of several writers' experiences as children growing up in America. Their stories are filled with incidents of violent abuse at the hand of the white people around them, and of being disregarded as credible members of school groups, and society at large as a result of simply being differently colored. Some of them talk about "passing" as white and thus striving throughout their childhoods to disguise their accents and behave in every way as much like white girls as they could. Frequently there followed, as the girls grew older and came to understand their parents' experiences and admire their own cultures for what they were, a desire to reclaim what their parents, fearing for their oppression, encouraged them to separate themselves from.

In the second section, entitled "Entering the Lives of Others: Theory in the Flesh," the women express their feeling of alienation from other women as a deeply painful separation from sisters, and talk about their desire for communion with them. They also describe the impressions of their mothers and the women of their cultures who remain in the oppression of their traditional roles, and seek to understand the roots of their definitions.

Third is "And When You Leave, Take Your Pictures With You: Racism in the Women's Movement" in which the women vent their frustration with the roles they are expected to play by the white women who monopolize the Women's Movement. They are frequently asked to serve as token representatives of Third World women so the white women feel inclusive, but having offered them the chance to speak, they don't seek out knowledge of their lives or priorities on their own.

Next, "Between the Lines: On Culture, Class and Homophobia" examines the ways culture, class and homophobia still manifest in the Women's Movement. The stories the women tell are about their desires to be heard as credible voices and to create a unified movement. They each have had to strive to build understanding among their own people, and to overcome differences among other women to make themselves heard in the Movement.

"Speaking in Tongues: The Third World Woman Writer" addresses the need for the voices of colored women to be heard, and discusses the conception among them that their voices are not worthy, as well as the deep and old pain that is almost inevitably unearthed when they write about their experiences. The writing in this chapter is some of the most poetic, filled with imagery and passion.

The book concludes with "El Mundo Zurdo: The Vision," a chapter that envisions the world a united feminist movement could create. The authors throughout are women who have been active in the Women's Movement and who are determined as a result to turn the differences among women of Third World races into strengths.

This Bridge Called My Back: Writings by Radical Women of Color from BookRags. (c)2022 BookRags, Inc. All rights reserved.