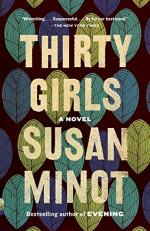 Susan Minot's "Thirty Girls" is a heart-breaking account of 30 girls from a private school in Uganda who are abducted by the Lord's Resistance Army to increase Kony's family. One of these children is 15-year-old Esther Akello who shares the story of her time with the rebels as she deals with the emotional repercussions of her experienced after her escape. A second narrative follows the journey of Jane Woods, an American journalist who travels to Africa in order to tell the girls' story with hopes of inspiring others to help. "Thirty Girls" is a fascinating historical fiction novel that explores the worst - and the best - of mankind.

In October 1996, rebels from the LRA abduct 139 girls from St. Mary's College in Aboke, Uganda. Headmistress Sister Giulia tracks the group, negotiating to retrieve 109 girls and leaving 30 of her students with the rebels. Esther Akello is one of these girls, and although she has escaped from the rebels and is living at the Kiryandongo Rehabilitation Center when the narrative begins, she recounts her experiences during captivity, sharing how it has impacted her. She is silent and withdrawn from the other children at the center, and her guilt over the things she was forced to witness and participate in lead her to believe that she does not deserve another chance at life.

Esther recalls her fear during the abduction and the rough treatment she and the other girls received at the hands of the rebels, although her husband, Greg Lotti, was kinder than most. Time was spent doing chores, and although escape was never far from their minds, the children were afraid to attempt it because the others would be punished if they succeeded, and if they failed, the penalty was death. Esther is plagued by memories of being forced to help beat Susanna to death and by her failed attempt to help Mary who was swept away by the river. When Kony asks to meet the St. Mary's girls, he chooses Agnes as his bedmate, adding Esther when she speaks out to protect her friend, believing the trauma is better endured together. Later, Esther tells Kony about Chunga's betrayal to elicit a blessing for Agnes, but Agnes is forced to accompany the rebels on a mission and dies because she is too weak. After giving birth to a stillborn baby, Esther finally finds a chance to escape, and for three days, she is uncertain whether she will live or die. She finally reaches Kiryandongo where her memories haunt her and she feels like her heart is suffocating. Although Esther sometimes feels that things will be fine, she disagrees with this thought and condemns herself to a hopeless future more often.

American journalist Jane Wood hears about the girls when Grace Dollo visits New York to promote her group, We Are Concerned, and Jane travels to Africa with the intent of spreading awareness and helping the abducted children. She is accompanied to Uganda by Lana, Don, a photographer named Pierre, and Harry with whom Jane falls in love. During the many interviews she conducts, Jane feels a great deal of empathy for the abducted girls, and at St. Mary's, she is touched by the peace of the place turned to the tragedy of abduction.

Grace encourages Jane to talk to Esther, and the two protagonists' paths finally intersect at Kiryandongo. Although Esther has refused to discuss her experiences thus far, she takes a chance at change by sharing her story with Jane who comforts her by pointing out that she does not do bad things now that she has control of her own life. After Jane leaves, Esther cries and starts to feel peace, playing with the other children and eventually looking forward to her future. Once their journey concludes, Harry ends his relationship with Jane, but he is shot that night and suffers brain damage, so his parents take him off life support. Mourning Harry, Jane stays in Kenya to write the girls' story and prolongs her stay after deciding she must use her life to do good things. Esther is happy when Louise finally escapes from the rebels, and she visits her friend at Kiryandongo to offer comfort. The escaped girls still pray for Helen, the last St. Mary's girl still with the rebels, but Esther finds peace and falls in love with life.