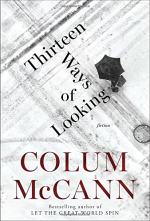 Colum McCann
This Study Guide consists of approximately 32 pages of chapter summaries, quotes, character analysis, themes, and more - everything you need to sharpen your knowledge of Thirteen Ways of Looking.

This detailed literature summary also contains Quotes and a Free Quiz on Thirteen Ways of Looking by Colum McCann .

Colum McCann’s “Thirteen Ways of Looking” is a short story collection made up of four pieces of short fiction. These works are of varying length and include a variety of different characters.

The first story in the work is the titular “Thirteen Ways of Looking.” “Thirteen Ways” is a story about a Jewish American and a former New York Supreme Court Justice, Peter Mendelssohn, who is murdered about half way through the story. The narrative shifts from Peter’s point of view before the murder takes place to an unnamed third person narrator who narrates parts of the murder investigation and trial.

Through the third person narrator, readers learn that Peter is murdered by a restaurant employee who works at a restaurant where Peter and his son, Elliot, eat lunch. Pedro, the employee, is angry at Elliot because he had an affair with Pedro’s daughter and later fired her. When Peter is walking home, he is attacked (it is possible that Pedro thought that Peter was Elliot) and killed. Within the story, we also learn about Peter’s deceased wife Eileen, his daughter, Katya, and the housekeeper that takes care of him in his old age, Sally.

The second story, ““What Time is it Now, Where You Are?” is a meta-narrative about a writer writing a New Year’s Eve story and about a character within said story. The reader is witness to the development of Sandi, a marine in Afghanistan, and her family back in Toledo. Sandi’s character and situation changes over time as the writer crafts the story. Through writing the story, the writer begins to reflect on his own family.

The third story, “Sh’Khol” is about a mother, Rebecca, who loses her deaf and adopted son after giving him a wet-suit for Christmas. In this story, Rebecca deals with the loss of her son and spirals into grief. After some exhaustive searching, the son, Tomas, reappears wearing a man’s clothes. Rebecca initially thinks that Tomas had been sexually abused during his disappearance, but a doctor says otherwise. Rebecca then decides to bathe Tomas, and during the bath, it seems that Tomas gets an erection and wishes to bathe himself. It then becomes clear to Rebecca that Tomas is going through puberty and is no longer a little boy.

The final story in the collection, “Treaty,” is a story about Beverly, a nun, and her confrontation with a man who had sexually abused her. Years ago, Beverly did missionary work in South America. During the mission, she was captured by right-wing militants who tortured and raped her. More than 30 years later, she sees the man’s face on television at a peace talk. She goes to London and confronts the man, who has changed his name. She forces the man to remember what he did to her all those years ago.

More summaries and resources for teaching or studying Thirteen Ways of Looking.