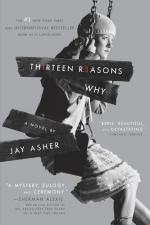 Jay Asher
This Study Guide consists of approximately 50 pages of chapter summaries, quotes, character analysis, themes, and more - everything you need to sharpen your knowledge of Thirteen Reasons Why.

This detailed literature summary also contains Quotes and a Free Quiz on Thirteen Reasons Why by Jay Asher.

Bullying by students and the stigma of suicide are themes in the novel Thirteen Reasons Why by Jay Asher. New to town, Hannah Baker hopes to have a new life. Unfortunately, rumors, betrayal, and revenge by her peers affect Hannah's life more than anyone knows. Though Hannah tries to reveal her pain to others, neither the school guidance counselor nor other students recognize her cries for help. Before committing suicide, Hannah records a collection of audiotapes explaining the actions which she believes pushed her to make the decision to take her own life.

Clay Jensen, who had liked Hannah despite rumors he had heard about the new girl, is one of thirteen people who receives Hannah’s audio suicide letter. He is shocked to learn how unfounded the rumors about Hannah being a slut were as they originated from one boy who was angry with her for not giving him more than a kiss. As Clay continues to listen to Hannah’s tapes, he becomes angrier and angrier with the way other students have treated Hannah. He is also upset with himself for not doing more to let Hannah know that he liked her. The novel ends with a note of hope as Clay steps out to befriend a girl whom he’d always liked but never approached because of her reputation of being strange.

This novel addresses issues facing modern students. Although she is not physically abused, Hannah is a victim of bullying. Like many students recently, Hannah feels the only way to solve her problems and stop the hurt is to take her own self out of the equation. Hannah leaves audiotapes behind, telling those who persecuted her about the exact impact that they had on her life. Clay believes some of the people included in the tapes may interpret the tapes only as Hannah’s way of blaming everyone else for her problems. Some good comes from Hannah’s story as Clay decides to take an active role in helping those around him.

More summaries and resources for teaching or studying Thirteen Reasons Why.