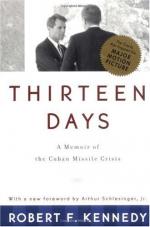 Robert F. Kennedy
This Study Guide consists of approximately 41 pages of chapter summaries, quotes, character analysis, themes, and more - everything you need to sharpen your knowledge of Thirteen Days; a Memoir of the Cuban Missile Crisis.

Thirteen Days; a Memoir of the Cuban Missile Crisis Summary & Study Guide includes comprehensive information and analysis to help you understand the book. This study guide contains the following sections:

This detailed literature summary also contains Topics for Discussion and a Free Quiz on Thirteen Days; a Memoir of the Cuban Missile Crisis by Robert F. Kennedy.

Thirteen Days is participant Robert F. Kennedy's memoir of the Cuban missile crisis that occurs from October 16 to October 28,1962. This even tis precipitated when Soviet offensive weapons are found in Cuba, contrary to public and private promises by Premier Nikita S. Khrushchev. President John F. Kennedy or JFK constitutes an Executive Committee of the National Security Council or "Ex Comm," whose members talk, argue, and fight their way to giving him recommendations to act on. One faction led by Defense Secretary McNamara favors quarantine and blockade options, while others advocate air strike and invasion. Everyone present agrees that time is running out. JFK decides on blockade, requests, and receives support from the Organization of American States or OAS and European allies. He then puts forces on maximum alert, briefs his Cabinet and leaders of Congress, and announces on television his reasons for quarantine and whatever additional military action might be needed.

JFK asks Khrushchev to observe the quarantine and control the situation, lest miscalculation or misjudgment cause a third World War. RFK visits the Russian Embassy personally to review how they have reached this point. As the quarantine goes into effect and Soviet ships steam forward, JFK is grim. It looks as though the first exchange will be with a Soviet submarine, until the ships stop dead in the water or turn back. At the U.N. Security Council Adelai Stevenson confronts V. A. Zorin with photographic evidence and has a "devastating effect." To give Khrushchev more time and not put him in an inescapable corner, JFK allows the tanker Bucharest to go on to Cuba, but intensifies photographic overflights. These show rapid construction.

JFK and Khrushchev correspond almost daily but it seems to have little effect until the Premier writes a long and emotional plea that they not succumb to "petty passions" or "transient things." Khrushchev has been in two wars and knows where it leads. Soviet missiles will not be used offensively and since Soviet ships do not carry no weapons. If JFK promises not to attack Cuba and lifts the blockade, the missiles can be removed or destroyed. A second, belligerent letter then arrives from the Kremlin. This plus the shooting down of a U-2 intensifies the situation, but JFK has Sorenson and RFK compose a response accepting Khrushchev's original "offer" and ignoring the second. RFK summons Dobrynin, reveals what the U.S. knows about activities in Cuba, and insists the U.S. needs a positive answer to the letter en route to Moscow. JFK wants peaceful relations and to move forward on controlling nuclear weapons -after the crisis is behind them.

Military confrontation seems likely when word comes the Soviets have agreed to withdraw their missiles. The final lesson of the Cuban missile crisis is the importance of putting oneself in another's shoes. Participants are forbidden to give interviews or claim victory. JFK respects Khrushchev for doing his job and for looking out for the interests of mankind. It is a triumph for the next generation rather than for any particular government or people. Neustadt and Allison's Afterword analyses RFK's memoir on three levels. The questions that they bring to light include how humans control the power to destroy humankind, how the American presidency works in microcosm, andhow the roles of Congress and the Presidency relate in time of war.

More summaries and resources for teaching or studying Thirteen Days; a Memoir of the Cuban Missile Crisis.