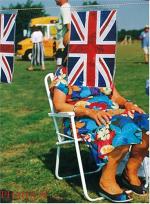 Arthur is Sarah's father and a widower who entrusts the family finances to his daughter now that she has a paying job. He is a sheep farmer who visits The Quarryman's Arms occasionally. He prefers to remain at the public bar with his Welsh-speaking friends rather than enter the lounge where Sarah serves the English-speaking patrons. He wears a "frayed dark suit" that was his "Sunday best" before Sarah was born.

Colin is one of the "sappers"men who mend roads, dig ditches, or lay brickswho is working on the new military base near the holiday resort. He is a corporal in the British military. He's known Sarah for a week, but she considers him to be her "sweetheart." The only physical description given of him is that he has a mustache. He lures Sarah to the abandoned campsite and assaults her sexually.