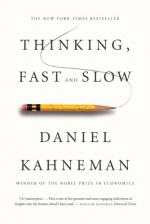 Daniel Kahneman
This Study Guide consists of approximately 39 pages of chapter summaries, quotes, character analysis, themes, and more - everything you need to sharpen your knowledge of Thinking, Fast and Slow.

“Thinking Fast and Slow” by Daniel Kahneman is a chronicling of the functions of the two ways of thinking that man has. These two entities are not located in specific or special lobes or parts of the brain. As the title suggested, one is fast and one is slow. The reader learns quickly that fast does not necessarily equate with good and that slow thinking can be the most powerful. For clarity, author Kahneman gives the two ways of thinking names.

System 1 is the fast thinker, the thinker that will jump to conclusions and make snap decisions. It bases its rapid response on a quick query of all the data that is stored in the individual’s memory. System 1 interprets input with the limited data and skills that it has. It may not always come up with a complete or accurate response to a question or event. If System 1 cannot respond to a specific question, it will answer another question that is close in nature to the first question. This response is referred to as heuristic.

System 2 must take over if System 1 is at a lost or the response that it spits out is too unreasonable for System 2 to accept it. Sometimes System 2 is lazy and ignores possible problems with a response but he doesn’t want to put the effort into finding a better response based on new, outside data. System 1 expends virtually no energy conducting its functions. It’s all auto-response and nothing creative or innovative.

System 2 is the boss of the two systems although System 1 rules when System 2 is too lazy to do its job. To find new data and correct the misguided response from System 1 requires a lot of energy on System 2’s part. His unwillingness to do so is what results in misinformation and errors. Even when System 2 overrides a System 1 response, System 1’s answer doesn’t go away. It lingers there as a reminder to System 2 that it could have take the easy way out and elect to use that answer.

The book moves beyond the basics of System 1 and System 2 thinking and on to other ways that man has learned to process information and make decisions. There is a plethora of information that includes detailed descriptions of research, test case studies and experiments conducted by Kahneman and his close associate Amos Tversky and other psychologists, social behaviorists and scientists.

Behavioral patterns of associative coherence, cognitive ease, intuition, loss aversion, regression to measure and theories including the prospect and utility theories are described and discussed in great detail. Elements that impact an individual’s choices and decisions are meticulously discussed and include, among others, the halo effect, priming and the endowment effect.

This book explains how we think, what we think we think, what we don’t know we are thinking, and how we can improve our life through gaining an understanding of our two-pronged thinking mechanism. This book will make you think… and think again.

More summaries and resources for teaching or studying Thinking, Fast and Slow.